1774: The Long Year of Revolution (Paperback) 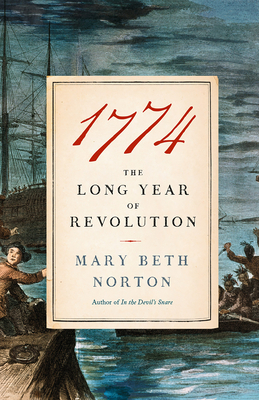 1774: The Long Year of Revolution (Paperback)


In Stock—Click for Locations
From one of our most acclaimed and original colonial historians, a groundbreaking book tracing the critical "long year" of 1774 and the revolutionary change that took place from the Boston Tea Party and the First Continental Congress to the Battles of Lexington and Concord.

A WALL STREET JOURNAL BEST BOOK OF THE YEAR

In this masterly work of history, the culmination of more than four decades of research and thought, Mary Beth Norton looks at the sixteen months leading up to the clashes at Lexington and Concord in mid-April 1775. This was the critical, and often overlooked, period when colonists traditionally loyal to King George III began their discordant “discussions” that led them to their acceptance of the inevitability of war against the British Empire. Drawing extensively on pamphlets, newspapers, and personal correspondence, Norton reconstructs colonial political discourse as it took place throughout 1774. Late in the year, conservatives mounted a vigorous campaign criticizing the First Continental Congress. But by then it was too late. In early 1775, colonial governors informed officials in London that they were unable to thwart the increasing power of local committees and their allied provincial congresses. Although the Declaration of Independence would not be formally adopted until July 1776, Americans had in effect “declared independence ” even before the outbreak of war in April 1775 by obeying the decrees of the provincial governments they had elected rather than colonial officials appointed by the king. Norton captures the tension and drama of this pivotal year and foundational moment in American history and brings it to life as no other historian has done before.
MARY BETH NORTON is the author of five books and coeditor of several others. Her textbook, A People and a Nation, a survey of U.S. history written with five other authors, has been published in ten editions and has sold more than 500,000 copies. Norton is the Mary Donlon Alger Professor Emerita of American History at Cornell University. She lives in Ithaca, New York.

"[Norton] does not fundamentally challenge the traditional trajectory of events in that decisive year. What she does do is enrich the narrative, filling in the story with a staggering amount of detail based on prodigious research in an enormous number of archives. . . . She wants to re-create as much as possible the past reality of this momentous year in all of its particularity. Only then, she suggests, will we come to appreciate the complexity of what happened and to understand all of the conflicts, divisions, and confusion that lay behind events, like the Tea Party, that historians highlight and simplify. . . . She seems to have read every newspaper in the period, and she delights in describing the give and take of debates between patriots and loyalists that took place in the press." --Gordon S. Wood, The Wall Street Journal

"Norton accomplishes something more than a revision of the traditional story of the coming of the American Revolution. She reminds us that even when it seemed inevitable that continuing protest would lead to violent confrontation with British troops, there were intelligent, articulate people in America who wanted desperately to head off the crisis." —New York Review of Books

"This was a world on the verge. Though every era writes its own history of the American Revolution, and this one is written from our world on the verge, Mary Beth Norton's 1774 is neither a celebratory account nor a cautionary tale. The Revolution is told not just from the perspective of Boston or Philadelphia, but from a more capacious and complex early America, a vital history of a vital time, told with an unflinching eye for the telling details and sometimes agonizing missteps that took Americans into war and independence. A brilliant book, by one of the very most insightful and significant historians of our time." --Karin Wulf, executive director of the Omohundro Institute of Early American History & Culture and professor of History at William & Mary

"Meticulous and persuasive. . . . Norton brings underappreciated figures such as Pennsylvania lawyer John Dickinson to the fore, and elucidates complex developments in all 13 colonies. This ambitious deep dive will remind readers that America has a long history of building consensus out of fractious disputes." --Publishers Weekly

"Many assume a clear, straightforward trajectory from the Tea Act and Tea Party to independence. But Norton's elegant, learned account shows otherwise . . . a crisp, persuasive narrative of the collapse of British rule and the decisive movement for independence." --Richard D. Brown, author of Self-Evident Truths

"Deeply researched. . . . Norton makes a good case for considering 1774 and not 1776 to be the foundational year of the new republic." --Kirkus