Buddhism Plain and Simple: The Practice of Being Aware Right Now, Every Day (Paperback) 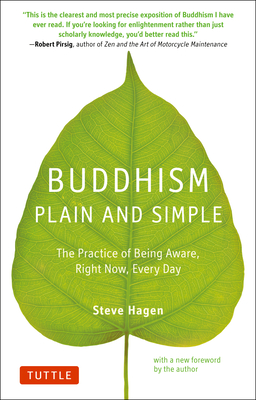 Buddhism Plain and Simple: The Practice of Being Aware Right Now, Every Day (Paperback)


Not On Our Shelves—Ships in 1-5 Days
"This is the clearest and most precise exposition of Buddhism I have ever read. If you're looking for enlightenment rather than just scholarly knowledge, you'd better read this."
--Robert Pirsig, author of Zen and the Art of Motorcycle Maintenance In Buddhism Plain and Simple, Zen priest and longtime teacher Steve Hagen presents the heart of Buddhist teachings, pared down to its essence and explained in simple, everyday language. This best-selling book is the perfect guide to Buddhism for beginners; the text has served international readers at all levels of study and practice since it was originally published over a decade ago. More than 300,000 copies in various formats have sold to date, and now it's available in this brand new edition with a high-quality binding and paper, as well as elegant decorative illustrations scattered throughout. Practiced by more than 1.2 million Americans and 2-3 million Europeans, Buddhism has become one of the West's largest religions. Whether you're simply interested in learning more about Buddhist philosophy, or hope to begin practicing but don't know where to start, Buddhism Plain and Simple will help you on your way. "This is a book about awareness. Not awareness of something in particular, but awareness itself--being awake, alert and in touch with what is actually happening. It's about examining and exploring the most basic questions of life. It's about relying on the immediate experience of this present moment. It's about freedom of mind. It's not about belief, doctrine, formula, or tradition." --from the Introduction.
Steve Hagen, Roshi, has been a student and practitioner of Zen since 1967. For fifteen years he studied with Dainin Katagiri, Roshi, from whom he received Dharma Transmission (endorsement to teach) in 1980. He is the founder of the Dharma Field Zen Center in Minneapolis, Minnesota, and the author of such works as Buddhism Is Not What You Think, Meditation Now or Never and Why the World Doesn't Seem to Make Sense.