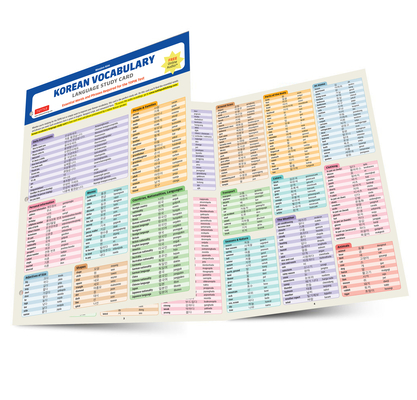 
Not On Our Shelves—Ships in 1-5 Days
A handy cheat sheet providing more than 1,000 key Korean vocabulary words and phrases in an at-a-glance, easy-to-carry format This language card is an essential resource for those studying for the TOPIK test, and invaluable for anyone who wants to quickly build their command of Korean vocabulary. Designed for convenience, this study card is:
Each English vocabulary word is given in Hangul and romanized script, presented in easy-to-read color-coded charts. Online audio recordings give native-speaker pronunciation for every word. Vocabulary items are laid out in clearly defined sections, including:
Woojoo Kim received a MA from the University of Washington in 2012, specializing in Political Science and International Relations. She was offered a teaching assistantship to teach Korean at the University of Washington in 2010 where she received the award of Distinguished Teaching Assistant. She is currently a lecturer in the Department of East Asian Languages and Cultures at the University of Southern California. Before that, she was a lecturer at the University of Oregon, University of Washington, and University of Michigan, where she taught all levels of Korean. Her research interests are language pedagogy, second language acquisition, and language culture.