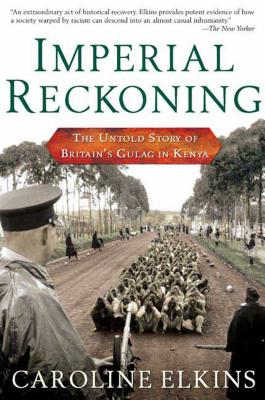 As part of the Allied forces, thousands of Kenyans fought alongside the British in World War II. But just a few years after the defeat of Hitler, the British colonial government detained nearly the entire population of Kenya's largest ethnic minority, the Kikuyu-some one and a half million people.

The compelling story of the system of prisons and work camps where thousands met their deaths has remained largely untold-the victim of a determined effort by the British to destroy all official records of their attempts to stop the Mau Mau uprising, the Kikuyu people's ultimately successful bid for Kenyan independence.

Caroline Elkins, an assistant professor of history at Harvard University, spent a decade in London, Nairobi, and the Kenyan countryside interviewing hundreds of Kikuyu men and women who survived the British camps, as well as the British and African loyalists who detained them.

The result is an unforgettable account of the unraveling of the British colonial empire in Kenya-a pivotal moment in twentieth- century history with chilling parallels to America's own imperial project.

Imperial Reckoning is the winner of the 2006 Pulitzer Prize for Nonfiction.

Caroline Elkins is an assistant professor of history at Harvard University. Conversant in Swahili and some Kikuyu, she has spent nearly a decade traveling and working in rural Africa. She and her research were the subjects of a 2002 BBC documentary entitled Kenya: White Terror. Imperial Reckoning is her first book. She lives in Cambridge, Massachusetts.

“Caroline Elkins has written an important book that can change our understanding not just of Africa but of ourselves. Through exhaustive research in neglected colonial archives and intrepid reporting among long-forgotten Kikuyu elders in Kenya's Rift Valley, Elkins has documented not just the true scale of a huge and harrowing crime--Britain's ruthless suppression of the Mau Mau rebellion--but also the equally shocking concealment of that crime and the inversion of historical memory.” —Bill Berkeley, author of The Graves Are Not Yet Full: Race, Tribe and Power in the Heart of Africa

“On the basis of the most painstaking research, Caroline Elkins has starkly illuminated one of the darkest secrets of late British imperialism. She has shown how, even when they profess the most altruistic of intentions, empires can still be brutal in their response to dissent by subject peoples. We all need reminding of that today.” —Niall Ferguson, Professor of History, Harvard University, and Senior Research Fellow, Jesus College, Oxford; author of Colossus: The Price of America's Empire and Empire: The Rise and Demise of the British World Order and the Lessons for Global Power


“In the 1950s, Mau Mau provided the Western world with photographic evidence of what Africa and Africans 'were like': savage, bloodthirsty, and in need of British civilization. Imperial Reckoning shows us how these images neglected to show the brutality and savagery being committed against the Kenyan Kikuyu people detained by the British. Caroline Elkins fills out the images, tells the rest of the story, and corrects the record in this masterful book.” —Henry Louis Gates, Jr., W.E.B. Du Bois Professor of the Humanities, Harvard University

“Rarely does a book come along that transforms the world's understanding of a country and its past by bringing to light buried, horrifying truths and redrawing central contours of its image. With voluminous evidence, Caroline Elkins exposes the long suppressed crimes and brutalities that democratic Britain and British settlers willingly perpetrated upon hundreds of thousands of Africans--truths that will permit no one of good faith to continue to accept the mythologized account of Britain's colonial past as merely a 'civilizing mission.' If you want to read one book this year about the catastrophic consequences of racism, about the cruelty of those who dehumanize others, or about the crimes that ideologically besotted people--including from western democratic countries--can self-righteously commit, Imperial Reckoning is that book.” —Daniel Jonah Goldhagen, author of Hitler's Willing Executioners: Ordinary Germans and the Holocaust and recipient of Germany's Democracy Prize

“Given the number and nature of the atrocities that filled the 20th century, the degree of brutality and violence perpetrated by British settlers, police, army and their African loyalist supporters against the Kikuyu during the Mau Mau period should not be surprising. Nor, perhaps, the fact that the British government turned a blind eye, and later covered them up. What is surprising, however, is that it has taken so long to document the whole ghastly story-this is what makes Caroline Elkins's disturbing and horrifying account so important and memorable.” —Caroline Moorehead, author of Human Cargo: A Journey Among Refugees and Gellhorn: A Twentieth-Century Life

“Imperial Reckoning is an incredible piece of historical sleuthing. The author has reconstructed the story that British officialdom almost succeeding in suppressing. Her sources are the Mau Mau fighters and sympathizers whom the British detained in concentration camps during the 1950s. Her interviews with the survivors of this British 'gulag' are a labor of love and courage--impressive in their frankness and deep emotional content as well as properly balanced between men and women, colonial officials and Mau Mau detainees. Caroline Elkins tells a story that would never have made it into the historical record had she not persevered and collected information from the last generation of Mau Mau detainees alive to bear witness to what happened.” —Robert Tignor, Rosengarten Professor of Modern and Contemporary History, Princeton University