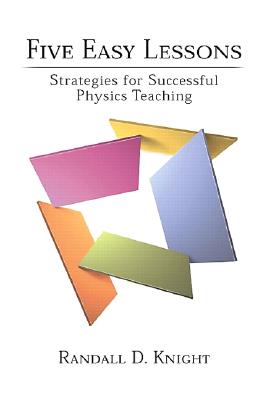 Five Easy Lessons: Strategies for Successful Physics Teaching is a paperback book packed with creative tips on how instructors can enhance and improve their physics class instruction techniques. It's an invaluable companion to Randy Knight's Physics for Scientists and Engineers -- or for any physics course.

Randy Knight has taught introductory physics for more than 20 years at Ohio State University and California Polytechnic University, San Luis Obispo, where he is currently Professor of Physics. Professor Knight received a bachelor's degree in physics from Washington University in St. Louis and a Ph.D. in physics from the University of California, Berkeley. He was a post-doctoral fellow at the Harvard-Smithsonian Center for Astrophysics before joining the faculty at Ohio State University. It was at Ohio State, under the mentorship of Professor Leonard Jossem, that he began to learn about the research in physics education that, many years later, led to this book. Professor Knight's research interests are in the field of lasers and spectroscopy. He recently led the effort to establish an environmental studies program at Cal Poly, where, in addition to teaching introductory physics, he also teaches classes on energy, oceanography, and environmental issues.