We Pointed Them North: Recollections of a Cowpuncher (Paperback) 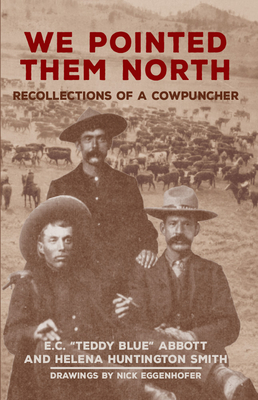 We Pointed Them North: Recollections of a Cowpuncher (Paperback)


Not On Our Shelves—Ships in 1-5 Days
E. C. Abbott was a cowboy in the great days of the 1870's and 1880's. He came up the trail to Montana from Texas with the long-horned herds which were to stock the northern ranges; he punched cows in Montana when there wasn't a fence in the territory; and he married a daughter of Granville Stuart, the famous early-day stockman and Montana pioneer. For more than fifty years he was known to cowmen from Texas to Alberta as "Teddy Blue." This is his story, as told to Helena Huntington Smith, who says that the book is "all Teddy Blue. My part was to keep out of the way and not mess it up by being literary.... Because the cowboy flourished in the middle of the Victorian age, which is certainly a funny paradox, no realistic picture of him was ever drawn in his own day. Here is a self-portrait by a cowboy which is full and honest." And Teddy Blue himself says, "Other old-timers have told all about stampedes and swimming rivers and what a terrible time we had, but they never put in any of the fun, and fun was at least half of it." So here it is--the cowboy classic, with the "terrible" times and the "fun" which have entertained readers everywhere. First published in 1939, We Pointed Them North has been brought back into print by the University of Oklahoma Press in completely new format, with drawings by Nick Eggenhofer, and with the full, original text.