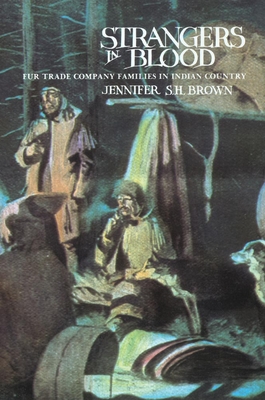 
Not On Our Shelves—Ships in 1-5 Days
"A long-needed comparative analysis of...the officer class of the Hudson's Bay and North West companies before and after their merger in 1821...Essential reading for all serious scholars of the fur trade."-Ethnohistory "The book makes a significant contribution to our understanding not only of the fur trade but also to anthropology and Indian-white relations." -Pacific Historical Review For two centuries (1670-1870), English, Scottish, and Canadian fur traders voyaged the myriad waterways of Rupert's Land, the vast territory charted to the Hudson's Bay Company and later splintered among five Canadian provinces and four American states. The knowledge and support of northern Native peoples were critical to the newcomer's survival and success. With acquaintance and alliance came intermarriage, and the unions of European traders and Native women generated thousands of descendants. Jennifer Brown's Strangers in Blood is the first work to look systematically at these parents and their children. Brown focuses on Hudson's Bay Company officers and North West Company wintering partners and clerks-those whose relationships are best known from post journals, correspondence, accounts, and wills. The durability of such families varied greatly. Settlers, missionaries, European women, and sometimes the courts challenged fur trade marriages. Some officers' Scottish and Canadian relatives dismissed Native wives and "Indian" progeny as illegitimate. Traders who took these ties seriously were obliged to defend them, to leave wills recognizing their wives and children, and to secure their legal and social status-to prove that they were kin, not "strangers in blood." Brown illustrates that the lives and identities of these children were shaped by factors far more complex than "blood." Sons and daughters diverged along paths affected by gender. Some descendants became M tis and espoused M tis nationhood under Louis Riel. Others rejected or were never offered that course-they passed into white or Indian communities or, in some instances, identified themselves (without prejudice) as "half breeds." The fur trade did not coalesce into a single society. Rather, like Rupert's Land, it splintered, and the historical consequences have been with us ever since. Jennifer S.H. Brown is a Professor of History at the University of Winnipeg. She is coauthor of The Orders of the Dreamed: George Nelson on Cree and Northern Ojibwa Religion and Myth, 1823, and coeditor of The New Peoples: Being and Becoming M tis in North America.