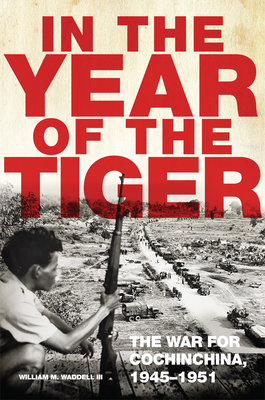 In 1950, France experienced two parallel but different outcomes in its Indochina war. While the conflict in the north ended with a disastrous defeat for the French at Dien Bien Phu, in southern Vietnam, or Cochinchina, France emerged victorious in a series of violent but now largely forgotten actions. In the Year of the Tiger tells the story of this critical southern campaign, revealing in dramatic detail how the French war for Cochinchina set the stage for the American war in Vietnam. In northern Vietnam, the French troops had focused on destroying Viet Minh main force units. A dearth of resources in the south dictated a different strategy. William M. Waddell III describes how, by avoiding costly attempts to defeat the Viet Minh in the traditional military sense, the southern French command was able to secure key economic and political strongholds. Consulting both French and Vietnamese sources, Waddell examines the principal commanders on both sides, their competing strategies, and the hard-fought military campaign that they waged for control of the south. The author's deft analysis suggests that counter to widely accepted views, the Viet Minh were not invincible, and the outcome of the conflict in Indochina was not inevitable. A challenge to historical orthodoxy, In the Year of the Tiger presents a more balanced interpretation of the French war for Indochina. At the same time, the book alters and expands our understanding of the precedents and the dynamics of America's Vietnam War.