The Formation of Latin American Nations: From Late Antiquity to Early Modernity (Paperback) 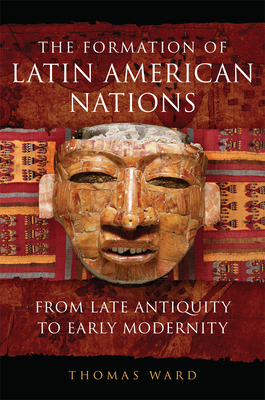 The Formation of Latin American Nations: From Late Antiquity to Early Modernity (Paperback)

This pioneering work brings the pre-Columbian and colonial history of Latin America home: rather than starting out in Spain and following Columbus and the conquistadores as they "discover" New World peoples, The Formation of Latin American Nations begins with the Mesoamerican and South American nations as they were before the advent of European colonialism-and only then moves on to the sixteenth-century Spanish arrival and its impact.

To form a clearer picture of precolonial Latin America, Thomas Ward reads between the lines in the "Chronicles of the Indies," filling in the blanks with information derived from archaeology, anthropology, genetics, and common-sense logic. Although he finds fascinating points of comparison among the K'iche' Maya in Central America, the polities (se or os) of Colombia, and the Chim of the northern Peruvian coast, Ward focuses on two of the best-known peoples: the Nahua (Aztec) of Central Mexico and the Inka of the Andes. His study privileges indigenous-identified authors such as Diego Mu oz Camargo, Fernando de Alva Ixtlilx chitl, Inca Garcilaso de la Vega, and Felipe Guaman Poma de Ayala while it also consults Spanish chroniclers like Hern n Cort's, Bernal Diaz del Castillo, Pedro Cieza de Le n, and Bartolom de las Casas.

The nation-forming processes that Ward theorizes feature two forms of cultural appropriation: the horizontal, in which nations appropriate people and customs from adjacent cultures, and the vertical, in which nations dig into their own past to fortify their concept of exceptionality. In defining these processes, Ward eschews the most common measure, race, instead opting for the Nahua altepetl, the Inka panaka, and the K'iche' amaq'. His work thus approaches the nation both as the indigenous people conceptualized it and with terminology that would have been familiar to them before and after contact with the Spanish. The result is a truly decolonial account of the formation and organization of Latin American nations, one that puts the indigenous perspective at its center.