Harnessing the Airplane: American and British Cavalry Responses to a New Technology, 1903-1939 (Paperback) 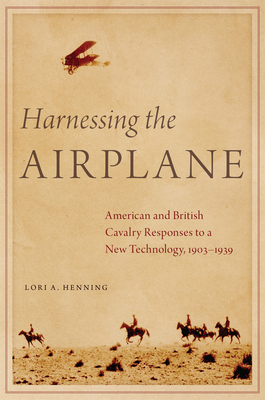 Harnessing the Airplane: American and British Cavalry Responses to a New Technology, 1903-1939 (Paperback)

By Lori A. Henning

At its dawn in the early twentieth century, the new technology of aviation posed a crucial question to American and British cavalry: what do we do with the airplane? Lacking the hindsight of historical perspective, cavalry planners based their decisions on incomplete information. Harnessing the Airplane compares how the American and British armies dealt with this unique challenge. A multilayered look at a critical aspect of modern industrial warfare, this book examines the ramifications of technological innovation and its role in the fraught relationship that developed between traditional ground units and emerging air forces. Cavalry officers pondered the potential military uses of airplanes and other new technologies early on, but preferred to test them before embracing and incorporating them in their operations. Cavalrymen cautiously examined airplane capabilities, developed applications and doctrine for joint operations, and in the United States, even tried to develop their own, specially designed craft. Throughout the interwar period, instead of replacing the cavalry, airplanes were used cooperatively with cavalry forces in reconnaissance, security, communication, protection, and pursuit--a collaboration tested in maneuvers and officially blessed in both British and American doctrine. This interdependent relationship changed drastically, however, during the 1930s as aviation priorities and doctrine shifted from tactical support of ground troops toward independent strategic bombardment. Henning shows that the American and British experiences with military aviation differed. The nascent British aviation service made quicker inroads into reconnaissance and scouting, even though the British cavalry was the older institution with more-established traditions. The American cavalry, despite its youth, contested the control of reconnaissance as late as the 1930s, years after similar arguments ended in Britain. Drawing on contemporary government reports, memoirs and journals of service personnel, books, and professional and trade journals and magazines, Harnessing the Airplane is a nuanced account of the cavalry's response to aviation over time and presents a new perspective on a significant chapter of twentieth-century military history.