Scottish Highlanders on the Eve of the Great Migration, 1725-1775. the People of Inverness-Shire. Volume 2 (Paperback) 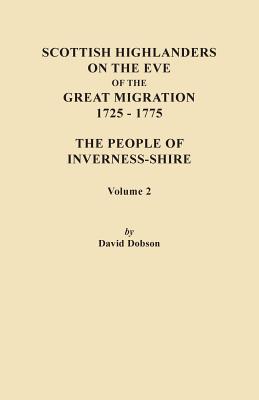 Scottish Highlanders on the Eve of the Great Migration, 1725-1775. the People of Inverness-Shire. Volume 2 (Paperback)


Not On Our Shelves—Ships in 1-5 Days
(This book cannot be returned.)
This book is the second volume of Highlanders from the county of Inverness, a location from which many of the pioneer emigrants who settled in colonial Georgia, Pennsylvania, upper New York, Jamaica, and the Canadian Maritimes originated. Inverness-shire is also the county where the Fraser's Highlanders regiment--which played a prominent part in the French and Indian War and in the settlement of Canada--was raised. Emigration from Inverness was also significant during and after the Highland Clearances of the 19th century. This volume (drawing on fresh sources like the Mackintosh Muniments, 1442-1820 and the Letter Book of bailie John Stewart of Inverness, 1714-1752) identifies about 1,500 additional Inverness Highlanders by name, a place within Inverness-shire (birth, residence, employment, etc.), a date, and the source. In some cases we also learn the identities of relatives, the individual's employment, vessel traveled on, and so forth.