People of the Scottish Burghs: A Genealogical Source Book. the People of Aberdeen, 1600-1799 (Paperback) 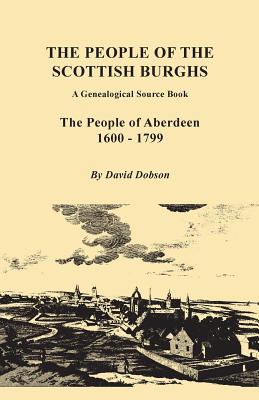 People of the Scottish Burghs: A Genealogical Source Book. the People of Aberdeen, 1600-1799 (Paperback)


Not On Our Shelves—Ships in 1-5 Days
(This book cannot be returned.)
This volume concentrates on the period 1600 to 1800 when Aberdeen was one of the main cities in Scotland. By the middle of the 17th century it had a population around 5,000; however, by the close of the 18th century it had nearly tripled, to 17,500. Dr. David Dobson, the compiler of this collection of Aberdeen's inhabitants during the era of New World emigration has consulted a range of documentary sources, including testaments, deeds, sassines property], marriage contracts, bonds, court records, and others, all of which provide a useful insight into the lives of the people of the period. Dr. Dobson identifies each of the nearly 2,000 inhabitants of Aberdeen by name, occupation, a date, and the source. In many instances he also provides additional facts, such as the name(s) of family members, if/when traveled to the Americas, contestants in civil suits, and so on.