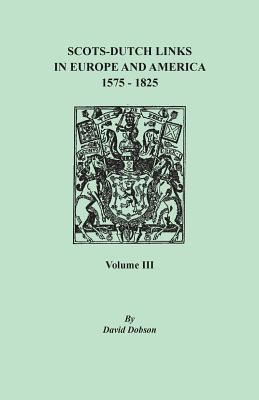 
Not On Our Shelves—Ships in 1-5 Days
(This book cannot be returned.)
In 2004 and again in 2011, Scottish emigration expert Dr. David Dobson combed primary and secondary sources on both sides of the Atlantic in order to document the links between Scotland, the Netherlands, and America. The results, "Scots-Dutch Links in Europe and America, 1575-1825," Volumes I and II, provide over several thousand references to this traffic. Dr. Dobson here has assembled a third collection of Scots-Dutch links from primary and secondary sources. In each case he states the individual's name, occupation (soldier, merchant, student, etc.), date of the reference, and the source. Volume III contains a significant number of marriages of Scottish immigrants that occurred in Rotterdam, often with local residents. Most occurred in the Scots Kirk or church there but others were held in other Protestant churches. There are also entries based on 17th-century Dutch wills or deeds of Scots, some of whom were bound for the Dutch colonies. Another source was the Court Book of the Scottish Staple at Veere, which identified Scots resident or trading there.