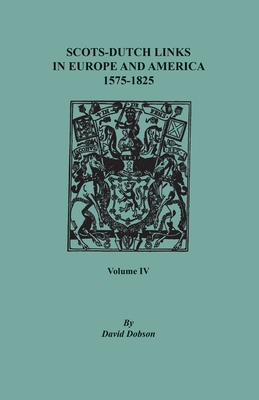 
Not On Our Shelves—Ships in 1-5 Days
(This book cannot be returned.)
Scotland has had strong economic, social, and military links with the Netherlands since the medieval period, but the main period of Scottish settlement occurred in the 17th century. Scottish scholars were attracted by the universities, while Scottish merchants and craftsmen could be found in towns and cities throughout the Netherlands. Possibly the greatest part of the Scots found in the Netherlands were soldiers fighting in the service of the United Provinces against the Spanish Hapsburgs. The Scots Brigade in Dutch Service was founded in 1572 and continued until 1782, during which time a significant number of men from Scotland fought and later settled in the Netherlands. A number of them and their descendants emigrated to the Dutch settlements in America, stretching from the Hudson River to the West Indies and Surinam. This book is based mainly on primary sources, notably the records of the High Court of the Admiralty of Scotland. In each case, Mr. Dobson states the individual's name, occupation (soldier, merchant, student, etc.), date of the reference, and the source. Marriage entries typically give the Scot's name and place of origin, those of his spouse, and sometimes the name(s) of parents, or more. In a few cases, the references are to Dutch persons who migrated in the opposite direction, lured by Scotland's offer of full naturalization.