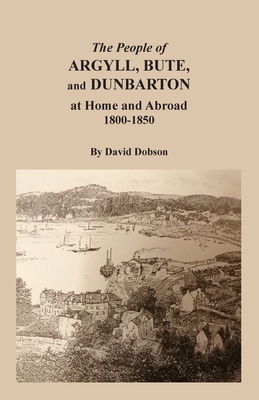 The counties of Argyll, Bute, and Dunbarton lie roughly northwest of Glasgow from the Firth of Clyde to the Firth of Lorne, together with Mull and some smaller islands. Most of the people identified here were recorded in contemporary sources, such as court records, newspapers, journals, and monumental inscriptions. Most entries bring together emigrants, their places of origin and destination, especially in North America and Australasia, with their kin who remained in Scotland. This book also identifies many of the burgesses of the burghs of Dunbarton ad Inveraray.

The early 19th century was a period of restructuring and development resulting from the Agricultural Revolution and the Industrial Revolution. Small farms were formed into larger units, which created a labor surplus. Some of the displaced persons emigrated to the British colonies or the United States, while others moved to the factory towns of the nearby industrial districts. In Argyll, Bute, and Dunbarton the economy remained largely based on farming and fishing, but there was an expansion of burghs functioning as market and administrative centers.