The People of Glasgow and Clydesdale at Home and Abroad, 1800-1850 (Paperback) 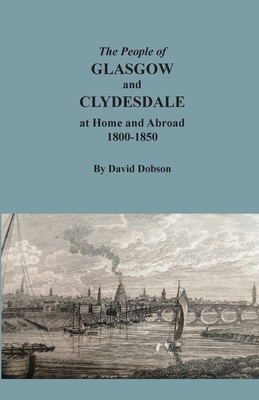 The People of Glasgow and Clydesdale at Home and Abroad, 1800-1850 (Paperback)

This book identifies the people resident in Glasgow and in neighboring Clydesdale (alias Lanarkshire), as well as persons abroad who originated in these locations, during the first half of the 19th century. The information derives from a wide range of sources such as court records, contemporary newspapers and journals, monumental inscriptions, and documents found in archives. The entries bring together emigrants, their origins, and destinations--especially in North America, the West Indies, and Australasia--with their kin who remained in Scotland.

The best sources for those researchers with their roots in or around Glasgow are two Family History Societies: the Glasgow and West Scotland FHS and the Lanarkshire FHS. The best singe genealogy library in the area is the Mitchell Library, Glasgow, which claims to be one of the largest reference libraries in Europe.

By 1800, the economy of Glasgow, already dependent on transatlantic trade, had begun to industrialize. Capital increasingly was invested in collieries and iron mines. engineering, shipbuilding, and textile factories to produce goods for export. The burgeoning population of Glasgow, partly stemming from immigrants from the West Highlands and from Ireland, also caused an expansion of agriculture along the Clyde Valley. The expanding population, however, gave rive to poverty, social unrest, and the spread of diseases such as typhus and cholera, which in turn fueled emigration to North America, . the West Indies, and Australasia. Glasgow's skilled white-collar work force was in demand abroad, especially in the rapidly industrializing United States, thus also contributing to emigration for this more affluent economic class.