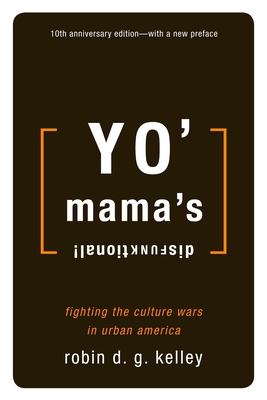 
Not On Our Shelves—Ships in 1-5 Days
In this vibrant, thought-provoking book, Kelley, "the preeminant historian of black popular culture writing today" (Cornel West) shows how the multicolored urban working class is the solution to the ills of American cities. He undermines widespread misunderstandings of black culture and shows how they have contributed to the failure of social policy to save our cities.
Robin D. G. Kelley is Distinguished Professor and Gary B. Nash Endowed Chair in U.S. History at UCLA. He is the author of seven books, including Freedom Dreams: The Black Radical Imagination, Thelonious Monk: The Life and Times of an American Original and Yo’ Mama’s DisFunktional!: Fighting the Culture Wars in Urban America.
It is not too much or too early to call Robin D. G. Kelley a leading black historian of the age. But it may not be enough. —Paul Buhle, Monthly Review

"Kelley's crafted a funny, fast-paced tour of recent and long-standing debates about the quality, form, and function of black life, an interdisciplinary performance that has him kicking up dust across all kinds of boundaries. . . . Kelley doesn't skimp on historical detail or intellectual rigor; best of all, he can play the dozens with the best of them." —The Village Voice Literary Supplement

"A salvo in response to the latest conservative efforts to mine the familiar battery of statistics in search of proof that African-Americans belong at the bottom of society. Kelley, a historian, turns his considerable skill toward public policy and perceptions." —William Jelani Cobb, Emerge

"Robin Kelley writes about culture, politics, Negrocons, disgruntled former leftists, and contemporary activists with intelligence, passion, insight, and great humor. This important, fluid book makes it clear that Kelley's genius is his ability to bring complex ideas down to earth and simultaneously make them transcendent." —Jill Nelson, author of Straight, No Chaser: How I Became a Grown-Up Black Woman

"Robin Kelley is a major new voice on the intellectual left. In this book, he argues with authority and intelligence that the familiar babble of rhetoric opposing identity politics to class politics is mistaken. Instead, muliculturalism should be viewed as part of the fabric of a strong class movement." —Frances Fox Piven, author of The Breaking of the American Social Contract