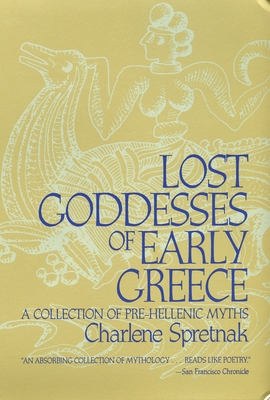 
Not On Our Shelves—Ships in 1-5 Days
For thousands of years before the classical myths were recorded by Hesiod and Homer, the Goddess was the focus of religion and culture. In Lost Goddesses of Early Greece, Charlene Spretnak recreates, the original, goddess-centered myths and illuminates the contemporary emergence of a spirituality based on our embeddedness in nature.
Charlene Spretnak is the author of several books that proposed a "map of the terrain" and an engagement with various emergent social movements, intellectual orientations, and largely unexplored subjects. She has helped to create an eco-social frame of reference and vision in the areas of social criticism, cultural history, philosophy, and religion and spirituality. Since the mid-1980s, all of her books have been an engagement with modernity, its discontents, and the corrective efforts that are arising. She is a co-founder of the Green Party movement in the United States and is a professor of philosophy and religion at the California Institute of Integral Studies, a graduate institute in San Francisco. In 2006 Charlene Spretnak was named by the British government's Environment Department as one of the "100 Eco-Heroes of All Time."
"Spretnak's treatment of the myths is most impressive." --Walter Burkert, author of Greek Religion

"Charlene Spretnak has succeeded extremely well in presenting pure characterizations of the Old European goddesses as they were revered for millennia, long before the Indo-European elements were imposed to create Olympian mythology." --Marija Gimbutas, author of The Language of the Goddess

"A truly beautiful book. With it Charlene Spretnak has raised new and important questions about the power of myth." --Merlin Stone, author of Ancient Mirrors of Womanhood

"The book is essential...both academically accurate and a personal medium of passage." --CoEvolution Quarterly

"Charlene Spretnak rediscovers the goddesses' early significance and in fascinating portraits restores them to their original glory." --Publishers Weekly

"A basic text of the goddess movement that has spread through feminist and ecological circles for a decade." --Boston Globe