Dangerous Ideas: A Brief History of Censorship in the West, from the Ancients to Fake News (Hardcover) 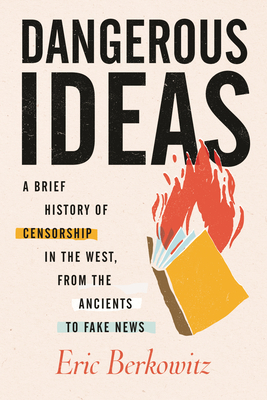 Dangerous Ideas: A Brief History of Censorship in the West, from the Ancients to Fake News (Hardcover)


Not On Our Shelves—Ships in 1-5 Days
A fascinating examination of how restricting speech has continuously shaped our culture, and how censorship is used as a tool to prop up authorities and maintain class and gender disparities

Through compelling narrative, historian Eric Berkowitz reveals how drastically censorship has shaped our modern society. More than just a history of censorship, Dangerous Ideas illuminates the power of restricting speech; how it has defined states, ideas, and culture; and (despite how each of us would like to believe otherwise) how it is something we all participate in.

This engaging cultural history of censorship and thought suppression throughout the ages takes readers from the first Chinese emperor’s wholesale elimination of books, to Henry VIII’s decree of death for anyone who “imagined” his demise, and on to the attack on Charlie Hebdo and the volatile politics surrounding censorship of social media.

Highlighting the base impulses driving many famous acts of suppression, Berkowitz demonstrates the fragility of power and how every individual can act as both the suppressor and the suppressed.
Eric Berkowitz is a writer, lawyer, and journalist. For more than 20 years, he practiced intellectual property and business litigation law in Los Angeles. Berkowitz has published widely throughout his career, and his writing has appeared in periodicals such as the New York Times, the Washington Post, The Economist, the Los Angeles Times, and LA Weekly. His previous books include Sex and Punishment and The Boundaries of Desire. He lives in San Francisco.
“[A] lively and wide-ranging history . . . [an] engrossing history of censorship.”
—The Economist

“Eric Berkowitz’s rollicking, entertaining book reminds us that ideas have always been contested and that censorship is undesirable and mostly counter-productive.”
—The Australian

“In his captivating sprint through two millennia of censorship, Eric Berkowitz chronicles some of the more bizarre and egregious episodes, while explaining that the human instinct to suppress speech has rarely waned.”
—Financial Times

“Terms like blasphemy, subversion and hate speech are impossible to define. No wonder attempts at censorship are inconsistent and often absurd.”
—Wall Street Journal

“This book supplies a useful and engaging grounding.”
—Morning Star

“A welcome unpolemical intervention in a debate where stridency is the norm.”
—The Telegraph, The 75 best books of 2021

“Eric Berkowitz’s absorbing and comprehensive history of censorship . . . . demonstrates that, although the fight for freedom of expression was key to the advance of civil liberties, the struggle is not over.”
—Chatham House

"Freedom of speech has fallen out of favor, now frequently associated with right-wing talking points. But here, in this nuanced outing, California human rights lawyer Eric Berkowitz gives the subject the consideration it’s due. He traces the history of attacks on free speech and explores why societies censor dissenting ideas."
—The Globe and Mail

“A timely contribution to an ongoing debate.”
—Kirkus Reviews

“[A] thought-provoking account . . . Berkowitz segues fluidly between historical eras and marshals a plethora of intriguing case studies. Readers will be convinced that policing harmful rhetoric too aggressively ‘will cause worse mischief in the long run.’”
—Publishers Weekly

“I have never read a more comprehensive, entertaining historical account of censorship in the West.”
—Greg Lukianoff, The FIRE (The Foundation for Individual Rights in Education)

“Free speech good! Censorship bad! Undeniable. Indisputable. Except that Eric Berkowitz denies and disputes with such intellectual agility as to induce cramping of the brain. Vivid, violent historical examples buttress the case against censorship, while we citizens of the Internet find ourselves drowning in crud for want of it. The point is you’ll enjoy the ride, and the argument has never been more pressing.”
—Ted Koppel

“Berkowitz untangles censorship’s maddening complexities to reveal core truths behind every book burning, every silencing of dissidents, and every removal of online content. . . . Dangerous Ideas takes the reader on an unruly ride—from the Vatican’s infamous list of banned books to algorithms that manipulate online speech to modern demands for safe spaces from offense. A hugely entertaining and urgently important book.”
—Nadine Strossen, former president of the ACLU and author of Hate: Why We Should Resist It with Free Speech, Not Censorship

“Eric Berkowitz has written a magnificent book that is original in its scope. . . . Beautifully written, this book leaves the reader with the strong sense that in every society there is the impulse to censor, but censorship rarely works.”
—Erwin Chemerinsky, dean, UC Berkeley School of Law, and author of The Case Against the Supreme Court

“The sweep of this book is vast and its judgments thoughtful. Above all, Berkowitz shows that censorship remains tempting for those in power, even as history demonstrates how often it proves futile.”
—Richard Tofel, president, ProPublica

“Unorthodox ideas can be dangerous enough to provoke censorship. Forbidden truths lurk in the shadows of taboo. With impressive scholarship and erudite humor, Eric Berkowitz guides the reader through mental spaces that have been declared off-limits from the ancient world to the present. Read this book before it’s banned.”
—Christopher Ryan, coauthor of Sex at Dawn

“A lively, engaging, and thoughtful history of the complex evolution of free speech . . . Berkowitz brings to life the most exciting and compelling controversies over free speech in the history of the Western world.”
—Geoffrey R. Stone, author of Perilous Times: Free Speech in Wartime from the Sedition Act of 1798 to the War on Terrorism

“In this vibrant and important book, Eric Berkowitz tackles one of the major issues facing society today and warns of the severe threats that come with the suppression of free ideas.”
—Richard Ovenden, author of Burning the Books: A History of Knowledge Under Attack