The Great Transformation: The Political and Economic Origins of Our Time (Paperback) 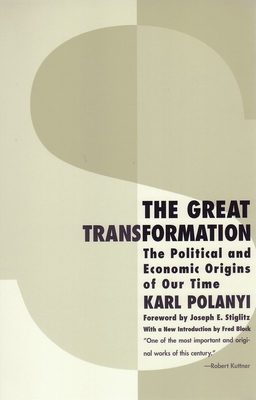 The Great Transformation: The Political and Economic Origins of Our Time (Paperback)


Not On Our Shelves—Ships in 1-5 Days
In this classic work of economic history and social theory, Karl Polanyi analyzes the economic and social changes brought about by the "great transformation" of the Industrial Revolution. His analysis explains not only the deficiencies of the self-regulating market, but the potentially dire social consequences of untempered market capitalism. New introductory material reveals the renewed importance of Polanyi's seminal analysis in an era of globalization and free trade.
Karl Polanyi (1886-1964) is considered one of the twentieth century's most discerning economic historians. He left his position as senior editor of Vienna's leading financial and economic weekly in 1933, became a British citizen, taught adult extension programs for Oxford and London Universities, and held visiting chairs at Bennington College and Columbia University. He is co-author of Christianity and the Social Revolution; author of The Great Transformation; Trade and Market in Early Empires (with C.Arnsberg and H.Pearson) and posthumously, Dahomey and the Slave Trade (with A.Rotstein).

Joseph E. Stiglitz was formerly chair of President Clinton's Council of Economic Advisors, and chief economist of the World Bank. He is professor of economics at Stanford University, and senior fellow at the Brookings Institution.

Fred Block is professor of sociology at the University of California, Davis.
As the Second World War was drawing to a close in 1944, two great works of political economy were published. One was Hayek's The Road to Serfdom, the driving force behind the free-market revolution in the final quarter of the twentieth century. The other was Karl Polanyi's The Great Transformation. . . . [It] is well worth reading. -Larry Elliott, The Guardian

"[The Great Transformation] did more than any work of that generation to broaden and deepen the critique of market societies."-John Buell, The Progressive