Our Grandchildren Redesigned: Life in the Bioengineered Society of the Near Future (Paperback) 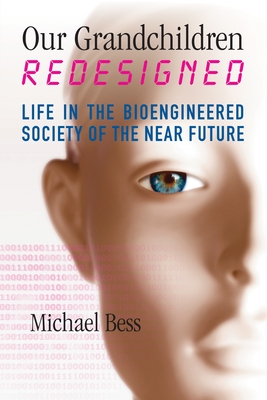 Our Grandchildren Redesigned: Life in the Bioengineered Society of the Near Future (Paperback)

Biotechnology is moving fast. In the coming decades, advanced pharmaceuticals, bioelectronics, and genetic interventions will be used not only to heal the sick but to boost human physical and mental performance to unprecedented levels. People will have access to pills that make them stronger and faster, informatic devices will interface seamlessly with the human brain, and epigenetic modification may allow people to reshape their own physical and mental identities at will.

Until recently, such major technological watersheds—like the development of metal tools or the industrialization of manufacturing—came about incrementally over centuries or longer. People and social systems had time to adapt: they gradually developed new values, norms, and habits to accommodate the transformed material conditions. But contemporary society is dangerously unprepared for the dramatic changes it is about to experience down this road on which it is already advancing at an accelerating pace.

The results will no doubt be mixed. People will live longer, healthier lives, will fine-tune their own thought processes, and will generate staggeringly complex and subtle forms of knowledge and insight. But these technologies also threaten to widen the rift between rich and poor, to generate new forms of social and economic division, and to force people to engage in constant cycles of upgrades and boosts merely to keep up. Individuals who boost their traits beyond a certain threshold may acquire such extreme capabilities that they will no longer be recognized as unambiguously human.

In this important and timely book, prize-winning historian Michael Bess provides a clear, nontechnical overview of cutting-edge biotechnology and paints a vivid portrait of a near-future society in which bioenhancement has become a part of everyday life. He surveys the ethical questions raised by the enhancement enterprise and explores the space for human agency in dealing with the challenges that these technologies will present.

Headed your way over the coming decades: new biotechnologies that can powerfully alter your body and mind.

The possibilities are tantalizing:

• Rejuvenation therapies offering much longer lives (160 and even beyond) in full vigor and mental acuity
• Cognitive enhancement through chemical or bioelectronic means (the rough equivalent of doubling or tripling IQ scores)
• Epigenetic tools for altering some of your genetically influenced traits at any point in your lifetime (body shape, athletic ability, intelligence, personality)
• Bioelectronic devices for modulating your own brain processes, including your “pleasure centers” (a potentially non-stop high)
• Direct control of machines by thought, and perhaps direct communication with other people, brain-to-brain (a new dimension of sharing and intimacy)

But some of the potential consequences are also alarming:

• A growing rift between the biologically enhanced and those who can’t afford such modifications
• A constant cycle of upgrades and boosts as the bar of “normal” rises ever higher—“Humans 95, Humans XP, Humans 8”
• The fragmentation of humankind into rival “bioenhancement clusters”
• A gradually blurring boundary between “person” and “product”
• Extreme forms of self-modification, with some individuals no longer recognized as unambiguously human
Michael Bess is the Chancellor’s Professor of History at Vanderbilt University. He has received major fellowships from the J. S. Guggenheim Foundation, the American Council of Learned Societies, the National Human Genome Research Institute, the John D. and Catherine T. MacArthur Foundation, and the Fulbright program. His previous books include Choices Under Fire and The Light-Green Society.
“In the future, accelerating technology and unexpected, revolutionary events—most of which will never be predicted by futurists—may produce a society as alien as some of our tools. Bess delivers an insightful philosophical analysis of how we must adjust.”
—Kirkus Reviews

“Rejuvenation therapies that could potentially extend human lifespans to 160 years or more, chemical or bioelectronic cognitive enhancement that could double or triple IQ scores, bioelectronic devices for modulating brain processes including ‘pleasure centers,’ so-called ‘designer babies,’ and much more are poised to cross the threshold from science fiction to reality in the near future. Michael Bess offers a sober prediction of how such advances will directly affect human society, and the ethical dilemmas that could result. Our Grandchildren Redesigned is fascinating from cover to cover and near-impossible to put down. Highly recommended!”
—The Midwest Book Review