French and Spanish Records of Louisiana: A Bibliographical Guide to Archive and Manuscript Sources (Paperback) 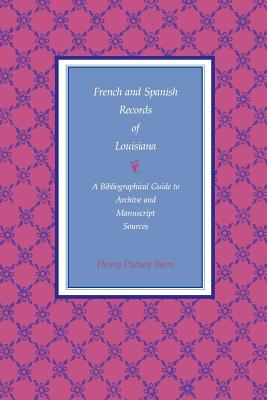 French and Spanish Records of Louisiana: A Bibliographical Guide to Archive and Manuscript Sources (Paperback)

Representing years of extensive research, this authoritative and comprehensive guide to the records generated in the Louisiana Territory during the French and Spanish colonial periods is a major reference work. Henry Putney Beers has painstakingly traced all types of documents, including land, military, and ecclesiastical records; registers of births, marriages, and burials; and private papers. Far more than a mere bibliographical listing, the book provides a complete history and description of these records and their past as well as current locations. When microfilms or other copies of particular bodies of documents exist, Beers describes the circumstances of reproduction and lists the locations of the copies.In the first part of the book, Beers presents a concise account of history and government in Louisiana, concentrating on the formation of a record-keeping bureaucracy. His detailed discussion includes information on available archival reproductions, documentary publications, and the nature and size of holdings in pertinent manuscript collections. Beers's examination of parish, land, and ecclesiastical records will serve as a vital resource. In the remainder of the book, he provides a similarly comprehensive treatment of the records of what are now Mississippi, Alabama, Missouri, and Arkansas.Beers traces repositories for these documents far beyond regional confines, locating some in Europe, Canada, and Cuba. For the early migrants to the region -- the Acadians, for example -- he describes source materials at the migrants' points of origin. He also provides information on documents that have been lost or destroyed, an important service that will save researchers much time.French and Spanish Records of Louisiana will prove to be of enormous value to a wide range of people: professional historians, local history buffs, genealogists, lawyers, archivists, and librarians.

Henry Putney Beers, author of The French in North America: A Bibliographical Guide to French Archives, Reproductions, and Research Missions, has worked as an archivist for the National Archives and as a historian for the State and Navy departments. He is now retired and engaged in independent historical research. He lives in Arlington, Virginia.