Political Polling in the Digital Age: The Challenge of Measuring and Understanding Public Opinion (Media and Public Affairs) (Paperback) 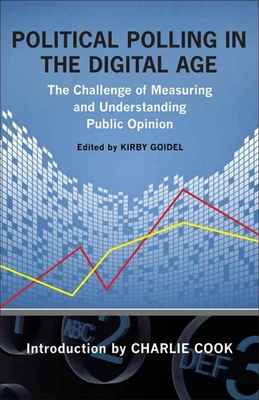 Political Polling in the Digital Age: The Challenge of Measuring and Understanding Public Opinion (Media and Public Affairs) (Paperback)

The 2008 presidential election provided a perfect storm for pollsters. A significant portion of the population had exchanged their landlines for cellphones, which made them harder to survey. Additionally, a potential Bradley effect -- in which white voters misrepresent their intentions of voting for or against a black candidate -- skewed predictions, and aggressive voter registration and mobilization campaigns by Barack Obama combined to challenge conventional understandings about how to measure and report public preferences. In the wake of these significant changes, Political Polling in the Digital Age, edited by Kirby Goidel, offers timely and insightful interpretations of the impact these trends will have on polling.
In this groundbreaking collection, contributors place recent developments in public-opinion polling into a broader historical context, examine how to construct accurate meanings from public-opinion surveys, and analyze the future of public-opinion polling. Notable contributors include Mark Blumenthal, editor and publisher of Pollster.com; Anna Greenberg, a leading Democratic pollster; and Scott Keeter, director of survey research for the Pew Research Center.
In an era of increasingly personalized and interactive communications, accurate political polling is more difficult and also more important. Political Polling in the Digital Age presents fresh perspectives and relevant tactics that demystify the variable world of opinion taking.

Charlie Cook is publisher of The Cook Political Report, a weekly columnist for National Journal and CongressDailyAM, and a political analyst for NBC News. Kirby Goidel is director of Louisiana State University's Manship School Research Facility, which includes the Public Policy Research Lab and the Media Effects Lab. As senior public policy fellow of the Reilly Center for Media & Public Affairs, he directs the annual Louisiana Survey and provides analysis of the findings to government organizations and the media. The author of two books and numerous journal articles, he is a professor in the Manship School of Mass Communication and the Department of Political Science.