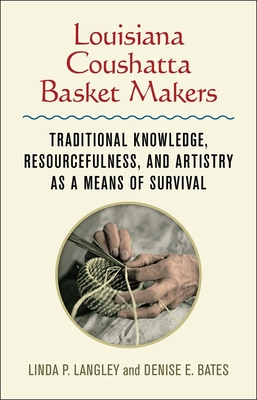 Louisiana Coushatta Basket Makers brings together oral histories, tribal records, archival materials, and archaeological evidence to explore the fascinating history of the Coushatta Tribe's famed basket weavers. After settling at their present location near the town of Elton, Louisiana, in the 1880s, the Coushatta (Koasati) tribe developed a basket industry that bolstered the local tribal economy and became the basis for generating tourism and political mobilization. The baskets represented a material culture that distinguished the Coushattas as Indigenous people within an ethnically and racially diverse region. Tribal leaders serving as diplomats also used baskets as strategic gifts as they built political and economic allegiances throughout the twentieth century, thereby securing the Coushattas' future.

Behind all these efforts were the basket makers themselves. Although a few Coushatta men assisted in the production of baskets, it was mostly women who put in the long hours to gather and process the materials, then skillfully stitch them together to produce treasures of all shapes and sizes. The art of basket making exists within a broader framework of Coushatta traditional teachings and educational practices that have persisted to the present. As they tell the story of Coushatta basket makers, Linda P. Langley and Denise E. Bates
provide a better understanding of the tribe's culture and values. The weavers' own "language of baskets" shapes this narrative, which depicts how the tribe survived repeated hardships as weavers responded on their own terms to market demands. The work of Coushatta basket makers represents the perseverance of traditional knowledge in the form of unique and carefully crafted fine art that continues to garner greater recognition and appreciation with every successive generation.
Linda P. Langley is the tribal historic preservation officer of the Coushatta Tribe of Louisiana and a former research professor of anthropology at McNeese State University. She is married to Bertney Langley, a member of the Coushatta Tribe, and has lived and worked in the tribal community for over thirty years. Denise E. Bates is a historian and assistant professor at Arizona State University. She is the author or editor of several books, including Basket Diplomacy: Leadership, Alliance-Building, and Resilience among the Coushatta Tribe of Louisiana, 1884-1984; We Will Always Be Here: Native Peoples on Living and Thriving in the South; and The Other Movement: Indian Rights and Civil Rights in the Deep South.