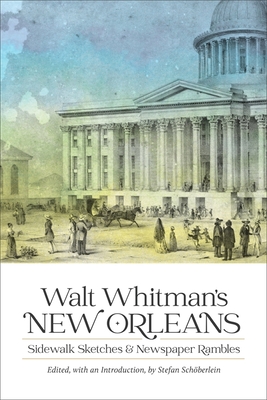 Walt Whitman's short stint in New Orleans during the spring of 1848 was a crucial moment of literary and personal development, with many celebrated poems from Leaves of Grass showing its influence. Walt Whitman's New Orleans is the first book dedicated to republishing his writings about the Crescent City, including numerous previously unknown pieces.

Often spending his afternoons strolling through the vibrant city with his brother in tow, the young Whitman translated his impressions into short prose sketches that cataloged curious sights, captured typical characters one might meet on the levee, and joked about the strangeness of urban life. Including the first complete run of a fictional, multipart series titled "Sketches of the Sidewalks and Levee," Walt Whitman's New Orleans pairs his glimpses of the city with historical illustrations, supplementary texts, detailed annotations, and an introduction by editor Stefan Sch berlein that offers new insights on the poet's southern sojourn. Whitmanites, history enthusiasts, and lovers of New Orleans will find much to treasure in these humorous, evocative scenes of antebellum city life.