All But My Life: A Memoir (Paperback) 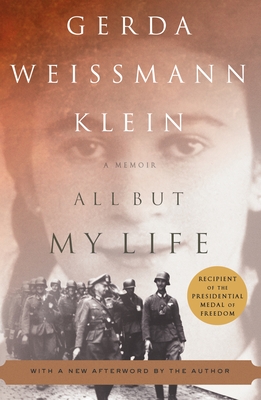 All But My Life: A Memoir (Paperback)

All But My Life is the unforgettable story of Gerda Weissmann Klein's six-year ordeal as a victim of Nazi cruelty.

From her comfortable home in Bielitz (present-day Bielsko) in Poland to her miraculous survival and her liberation by American troops--including the man who was to become her husband--in Volary, Czechoslovakia, in 1945, Gerda takes the reader on a terrifying journey.

Gerda's serene and idyllic childhood is shattered when Nazis march into Poland on September 3, 1939. Although the Weissmanns were permitted to live for a while in the basement of their home, they were eventually separated and sent to German labor camps. Over the next few years Gerda experienced the slow, inexorable stripping away of "all but her life." By the end of the war she had lost her parents, brother, home, possessions, and community; even the dear friends she made in the labor camps, with whom she had shared so many hardships, were dead.

Despite her horrifying experiences, Klein conveys great strength of spirit and faith in humanity. In the darkness of the camps, Gerda and her young friends manage to create a community of friendship and love. Although stripped of the essence of life, they were able to survive the barbarity of their captors. Gerda's beautifully written story gives an invaluable message to everyone. It introduces them to last century's terrible history of devastation and prejudice, yet offers them hope that the effects of hatred can be overcome.

Gerda Weissmann Klein was born in Bielsko, Poland, in 1924. She and her husband, and Kurt Klein, are advocates of Holocaust education and human rights. They lecture frequently and have written extensively about their experiences during the Holocaust. They have been married for over 50 years and reside in Scottsdale, Arizona.

Gerda's memoir, All But My Life, was adapted into the Academy- and Emmy Award-winning short film One Survivor Remains. With her husband, she edited The Hours After, a collection of letters they had exchanged while separated for a year after their engagement following World War II.

“An unforgettable reading experience . . . All But My Life is one of the most beautifully written human documents I have ever read. In this respect it is as sensitive and 'disturbing' a story as is The Diary of Anne Frank.” —Library Journal

“Gerda Weissmann Klein moves you, and not just because the story she can tell is so horrific. It is the passion with which she looked through the horror and found a heart-felt and basic goodness in humanity . . . All But My Life is filled with wonderful acts of decency and normalcy, even as she describes three years in labor camps and three months of a forced winter march from Germany to Czechoslovakia.” —Royal Ford, The Boston Globe