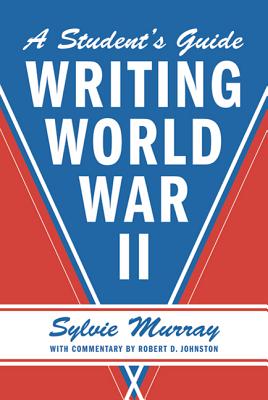 An indispensable tool for high-schoolers, undergraduates, or even amateur enthusiasts, Writing World War II teaches the craft of history writing—by example. In a series of thoughtful essays, Sylvie Murray examines American involvement in World War II and how it has subsequently been portrayed by historians. Murray addresses three broad topics—the prelude to war, the war effort on the home front, and the atypical experiences of soldiers—in an effort to recapture the mixed emotions of the time and the larger forces shaping public opinion. Her work challenges the traditional notions of "the greatest generation" and "the good war," and explores viewpoints that have been largely ignored in popular retellings. The book serves a dual purpose, critiquing the approaches of various historians while at the same time offering Murray's own writing as a model for constructing a persuasive essay.

But as Murray is rightly critical of one-sided historical arguments, Writing World War II offers another layer of analysis and instruction throughout. At various points in the book, her fellow historian Robert D. Johnston chimes in to assess Murray's prose, demystifying her techniques while helping you to become more critical of all sorts of historical writing—including your own.

Sylvie Murray teaches American history at the University of the Fraser Valley in Abbotsford, British Columbia. She is the author of Writing World War II: A Student's Guide.

“Sylvie Murray delivers a master class in the writing of history for serious readers and students of American history. Her ingenious book of nine short essays on our nation's involvement in World War II . . . illustrates the critical role of interpretative choices in presenting history.” —Shelf Awareness

“This slim book could make an awful lot of people mad. And that's a good thing. Author Sylvie Murray's target is the mythology growing like barnacles around popular history. Its epitome is the 'Greatest Generation' ancestor worship popularized by Tom Brokaw, spun out of Hollywood melodramas often far removed from the gritty textures of real life during wartime . . . Murray tackles this task with provocative candor. She demonstrates that our past is a moving target, and understanding comes from constantly unearthing, interpreting, and reinterpreting evidence--and arguing over the results . . . This admirable experiment is aimed at college undergrads, but any history buff would profit from arguing seriously with it.” —Gene Santoro, World War II Magazine

“This unique and provocative collaboration provides an insightful look at the historiographical debates surrounding World War II. At the same time, it offers a behind-the-scenes look at how historians pursue their craft.” —Elaine Tyler May, author of Homeward Bound: American Families in the Cold War Era