Virginia Hasn't Always Been for Lovers: Interracial Marriage Bans and the Case of Richard and Mildred Loving (Paperback) 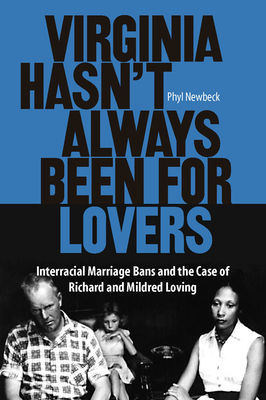 Virginia Hasn't Always Been for Lovers: Interracial Marriage Bans and the Case of Richard and Mildred Loving (Paperback)

This landmark volume chronicles the history of laws banning interracial marriage in the United States with particular emphasis on the case of Richard and Mildred Loving, a white man and a black woman who were convicted by the state of Virginia of the crime of marrying across racial lines in the late 1950s. The Lovings were not activists, but their battle to live together as husband and wife in their home state instigated the 1967 U.S. Supreme Court ruling that antimiscegenation laws were unconstitutional, which ultimately resulted in the overturning of laws against interracial marriage that were still in effect in sixteen states by the late 1960s.

A graduate of Barnard College and New York Law School, Phyl Newbeck is a licensed attorney and the director of the Vermont Teacher Diversity Scholarship Program.

“Phyl Newbeck’s Virginia Hasn’t Always Been for Lovers is a clearly written, accessible, well-organized, and remarkably researched history of the path-breaking Loving case. . . .  Of particular interest is Newbeck’s seemingly indefatigable effort to interview everyone involved in Loving and other significant cases and her assiduous efforts to track down the documentary record.”—Michael Meltsner, Harvard Law School and Northeastern Law School

“Newbeck’s exploration of the antimiscegenation laws in America touches the very core of racial discrimination and race hatred in America: sexual intimacy between races. Using the Lovings as the tale-telling prism, she does an excellent job of illuminating the dreadful life—and happy death—of these racist laws and folkways.”—Howard Ball, author of Murder in Mississippi

“Virginia Hasn’t Always Been for Lovers is quite correct to take the hypocrisy of this state to task. It was all right for white men to congress with black women, as long as the white men didn’t marry their dusky lovers. Richard and Mildred Loving challenged that hypocrisy. And brought a candle to the dark tower of race hatred. That Virginia is for loving. And there are next steps to be taken.” —Nikki Giovanni, poet, Virginia Tech University