Four of the Three Musketeers: The Marx Brothers on Stage (Paperback) 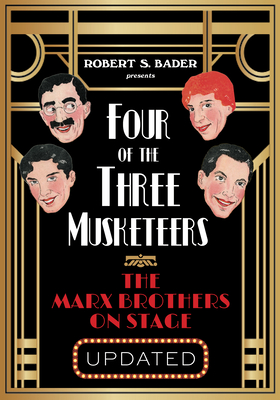 Four of the Three Musketeers: The Marx Brothers on Stage (Paperback)

Before film made them international comedy legends, the Marx Brothers developed their comic skills on stage for twenty-five years. In Four of the Three Musketeers: The Marx Brothers on Stage, Robert S. Bader offers the first comprehensive history of the foursome’s hardscrabble early years honing their act in front of live audiences.

From Groucho’s debut in 1905 to their final live performances of scenes from A Night in Casablanca in 1945, the brothers’ stage career shows how their characters and routines evolved before their arrival in Hollywood. Four of the Three Musketeers draws on an unmatched array of sources, many not referenced elsewhere. Bader’s detailed portrait of the struggling young actors both brings to vivid life a typical night on the road for the Marx Brothers and illuminates the inner workings of the vaudeville business, especially during its peak in the 1920s.

As Bader traces the origins of the characters that would later come to be beloved by filmgoers, he also skillfully scrapes away the accretion of rumors and mythology perpetuated not only by fans and writers but by the Marx Brothers themselves. Revealing, vital, and entertaining, Four of the Three Musketeers has taken its place as an essential reference for this legendary American act. Now, the updated edition adds newly discovered performances—some submitted by readers—and additional information provided by descendants of long-departed vaudevillians mentioned in the book.

ROBERT S. BADER is a writer, producer, and filmmaker, as well as the editor of Groucho Marx and Other Short Stories and Tall Tales and coauthor of Speaking of Harpo with Susan Fleming Marx, wife of Harpo Marx. Bader is the curator of the Bing Crosby Archive. He wrote, produced, and directed Ali & Cavett: The Tale of the Tapes (HBO, 2020), which was honored with a Critics’ Choice Documentary Award, and Groucho & Cavett, part of the American Masters series (PBS, 2022). He lives in Los Angeles.
"As far as I’m concerned, the Marx Brothers practically invented comedy. And I love this great new book about them by Robert Bader!” —Jerry Seinfeld

“Who would have dreamed that there could be much, much more to learn in still another book about the Marx Brothers? Not I. And yet, Robert Bader—focusing on the under-researched vaudeville days of the hilarious siblings—has gone where no man went before, discovering a treasure trove of Marxiana to delight the hearts and minds of those of us who can never get enough.” —Dick Cavett

“I have read virtually every book ever published about the Marx Brothers. I have even written about them myself. Robert Bader’s book is a revelation.” —Leonard Maltin, author of Leonard Maltin’s Movie Guide and The Great Movie Comedians

“In discussing the brothers' personal and professional accomplishments, Bader gives each man his due individual and group justice. Dozens of good books have been written on these brothers . . . and Bader's rich volume joins those.” —CHOICE

“In Four of the Three Musketeers Robert S. Bader shows that Groucho, Chico, Harpo and Zeppo had nothing on Minnie Marx—the booster, nag and agent who set them on their way to fame.” —Wall Street Journal

“A book that no devoted Marx Brothers fan should be without . . . Four of the Three Musketeers is a fascinating, indispensable book that details the evolution of one of the greatest comedy teams as they went through a long, bumpy trial by fire.”  —Montreal Times