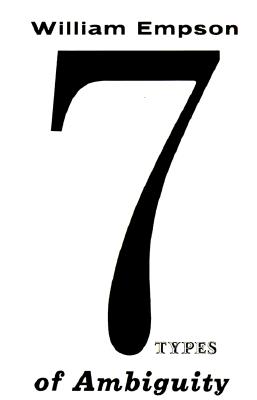 First published in 1930, Seven Types of Ambiguity has long been recognized as a landmark in the history of English literary criticism.

Revised twice since it first appeared, it has remained one of the most widely read and quoted works of literary analysis. Ambiguity, according to Empson, includes "any verbal nuance, however slight, which gives room for alternative reactions to the same piece of language." From this definition, broad enough by his own admission sometimes to see "stretched absurdly far," he launches into a brilliant discussion, under seven classifications of differing complexity and depth, of such works, among others, as Shakespeare's plays and the poetry of Chaucer, Donne, Marvell, Pope, Wordsworth, Gerard Manley Hopkins, and T. S. Eliot.