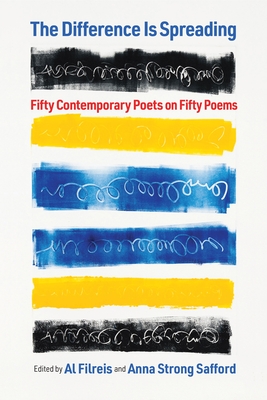 Since its inception in 2012, the hugely successful online introduction to modern poetry known as ModPo has engaged some 415,000 readers, listeners, teachers, and poets with its focus on a modern and contemporary American tradition that runs from Walt Whitman and Emily Dickinson up to some of today's freshest and most experimental written and spoken verse. In The Difference Is Spreading, ModPo's Al Filreis and Anna Strong Safford have handed the microphone over to the poets themselves, by inviting fifty of them to select and comment upon a poem by another writer.

The approaches taken are various, confirming that there are as many ways for a poet to write about someone else's poem as there are poet-poem matches in this volume. Yet a straight-through reading of the fifty poems anthologized here, along with the fifty responses to them, emphatically demonstrates the importance to poetry of community, of socioaesthetic networks and lines of connection, and of expressions of affection and honor due to one's innovative colleagues and predecessors. Through the curation of these selections, Filreis and Safford express their belief that the poems that are most challenging and most dynamic are those that are open--the writings, that is, that ask their readers to participate in making their meaning. Poetry happens when a reader and a poet come in contact with one another, when the reader, whether celebrated poet or novice, is invited to do interpretive work--for without that convergence, poetry is inert.
Al Filreis is Kelly Professor of English at the University of Pennsylvania, where he is also Faculty Director of the Kelly Writers House, publisher of Jacket2 magazine, and co-director of PennSound. He is the creator and lead teacher of the open online course on modern and contemporary poetry, ModPo. His most recent book is 1960: When Art and Literature Confronted the Memory of World War II and Remade the Modern. Anna Strong Safford is an Upper School English teacher at the Episcopal Academy. Previously, she was an instructor and curriculum specialist at the University of Pennsylvania's School of Liberal and Professional Studies and the Course Coordinator for ModPo. She has taught at Temple University, the Community College of Philadelphia, and Boston College, and her poems and essays can be found in Supplement, Cleaver, and other publications.