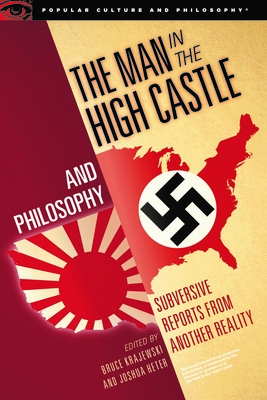 
Backordered
The Man in the High Castle is an Amazon TV show, based on the Philip K. Dick novel, about an alternate present (beginning in the 1960s) in which Germany and Japan won World War II, with the former Western US occupied by Japan, the former Eastern U.S. occupied by Nazi Germany, and a small neutral zone between them. A theme of the story is that in this alternative world there is eager speculation, fueled by the illicit newsreel, The Grasshopper Lies Heavy, about how the world would have been different if America had won the war. In The Man in the High Castle and Philosophy, twenty-two professional thinkers look at philosophical issues raised by this ongoing enterprise in alternative history. One question is whether it really made a profound difference that the Allies won the war, and exactly what differences in everyday life we may expect to arise from an apparent historical turning point. Could it be that some dramatic historical events have only superficial consequences, while some unnoticed occurrences lead to catastrophic results? Another topic is the quest for truth in a world of government misinformation, and how dissenting organizations can make headway.
Bruce Krajewski is Professor and Chair of the Department of English, University of Texas at Arlington. He is the author of Traveling with Hermes: Hermeneutics and Rhetoric (1992) and translator and editor of Gadamer on Celan (1996). Joshua Heter holds a Ph.D. in Philosophy from Saint Louis University. He currently teaches at Iowa Western Community College.