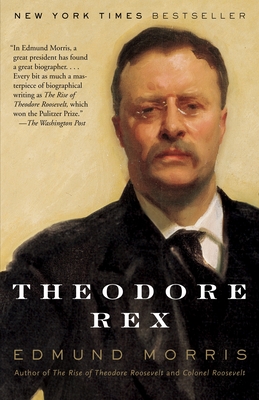 
Not On Our Shelves—Ships in 1-5 Days
NEW YORK TIMES BESTSELLER • “A shining portrait of a presciently modern political genius maneuvering in a gilded age of wealth, optimism, excess and American global ascension.”—San Francisco Chronicle

WINNER OF THE LOS ANGELES TIMES BOOK PRIZE FOR BIOGRAPHY • “[Theodore Rex] is one of the great histories of the American presidency, worthy of being on a shelf alongside Henry Adams’s volumes on Jefferson and Madison.”—Times Literary Supplement

Theodore Rex is the story—never fully told before—of Theodore Roosevelt’s two world-changing terms as President of the United States. A hundred years before the catastrophe of September 11, 2001, “TR” succeeded to power in the aftermath of an act of terrorism. Youngest of all our chief executives, he rallied a stricken nation with his superhuman energy, charm, and political skills. He proceeded to combat the problems of race and labor relations and trust control while making the Panama Canal possible and winning the Nobel Peace Prize. But his most historic achievement remains his creation of a national conservation policy, and his monument millions of acres of protected parks and forest.

Theodore Rex ends with TR leaving office, still only fifty years old, his future reputation secure as one of our greatest presidents.
Edmund Morris was born and educated in Kenya and attended college in South Africa. He worked as an advertising copywriter in London before immigrating to the United States in 1968. His first book, The Rise of Theodore Roosevelt, won the Pulitzer Prize and the National Book Award in 1980. Its sequel, Theodore Rex, won the Los Angeles Times Book Prize for Biography in 2001. In between these two books, Morris became President Reagan’s authorized biographer and wrote the national bestseller Dutch: A Memoir of Ronald Reagan. He then completed his trilogy on the life of the twenty-sixth president with Colonel Roosevelt, also a bestseller, and has published Beethoven: The Universal Composer and This Living Hand and Other Essays. Edison is his final work of biography. He was married to fellow biographer Sylvia Jukes Morris for fifty-two years. Edmund Morris died in 2019.
“In Edmund Morris, a great president has found a great biographer. . . . Every bit as much a masterpiece of biographical writing as The Rise of Theodore Roosevelt, which won the Pulitzer Prize.”—The Washington Post

“As a literary work on Theodore Roosevelt, it is unlikely ever to be surpassed. It is one of the great histories of the American presidency, worthy of being on a shelf alongside Henry Adams’s volumes on Jefferson and Madison.”—Times Literary Supplement

“Take a deep breath and dive into Theodore Rex, Edmund Morris’s sequel to his 1979 masterpiece, The Rise of Theodore Roosevelt. . . . He writes with a breezy verve that makes the pages fly.”—The New York Times Book Review

“Roosevelt is a biographer’s dream, an epic character not out of place in an adventure novel.”—The Christian Science Monitor