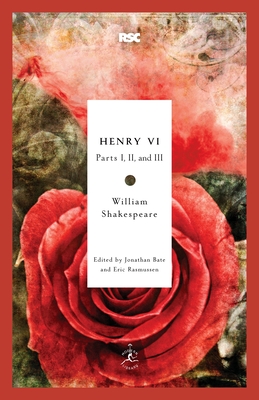 
Not On Our Shelves—Ships in 1-5 Days
“The gaudy, blabbing and remorseful day
Is crept into the bosom of the sea.”
—Henry VI

Eminent Shakespearean scholars Jonathan Bate and Eric Rasmussen provide a fresh new edition of the three-part classic history that revolves around the epic, dynastic Wars of the Roses.

THIS VOLUME ALSO INCLUDES MORE THAN A HUNDRED PAGES OF EXCLUSIVE FEATURES:

• an original Introduction to Henry VI
• incisive scene-by-scene synopses and analyses with vital facts about the work
• commentary on past and current productions based on interviews with leading directors, actors, and designers
• photographs of key RSC productions
• an overview of Shakespeare’s theatrical career and chronology of his plays

Ideal for students, theater professionals, and general readers, these modern and accessible editions from the Royal Shakespeare Company set a new standard in Shakespearean literature for the twenty-first century.
William Shakespeare (1564–1616) was a poet, playwright, and actor who is widely regarded as one of the most influential writers in the history of the English language. Often referred to as the Bard of Avon, Shakespeare's vast body of work includes comedic, tragic, and historical plays; poems; and 154 sonnets. His dramatic works have been translated into every major language and are performed more often than those of any other playwright.

Jonathan Bate is a professor of Shakespeare and Renaissance literature at the University of Warwick. Widely known as a critic, award-winning biographer, and broadcaster, Bate is the author of several books on Shakespeare. He is also the principal editor of the Modern Library’s and Royal Shakespeare Company’s highly acclaimed William Shakespeare: Complete Works.

Eric Rasmussen, a professor of English at the University of Nevada, is one of today's leading textual experts on Shakespeare.
“A remarkable edition, one that makes Shakespeare’s extraordinary accomplishment more vivid than ever.”—James Shapiro, professor, Columbia University, bestselling author of A Year in the Life of Shakespeare: 1599

“A feast of literary and historical information.”—The Wall Street Journal