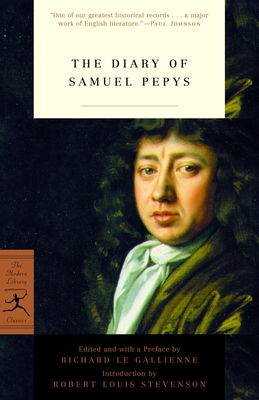 
Not On Our Shelves—Ships in 1-5 Days
Richard Le Gallienne’s elegant abridgment of the Diary captures the essential writings of Samuel Pepys (1633–1703), a remarkable man who witnessed the coronation of Charles II, the Great Plague of 1665, and the Great Fire of 1666. Originally scribbled in a cryptic shorthand, Pepys’s quotidian journal of life in Restoration London provides an astonishingly frank and diverting account of political intrigues; naval, church, and cultural affairs; and the sexual escapades and domestic strife of a man with a voracious, childlike appetite for living. “As a human document the Diary is literally unique,” notes Le Gallienne. “It will have a still greater value for its historical importance.”
Richard Le Gallienne (1867–1947) was one of Britain’s leading literary critics. His abridgment of The Diary of Samuel Pepys is considered a triumph of editing.

Robert Louis Stevenson (1850–1894) is one of the most widely read and admired novelists of the nineteenth century.
“One of our greatest historical records . . . a major work of English literature.” —Paul Johnson