Drawn to the Deep: The Remarkable Underwater Explorations of Wes Skiles (Hardcover) 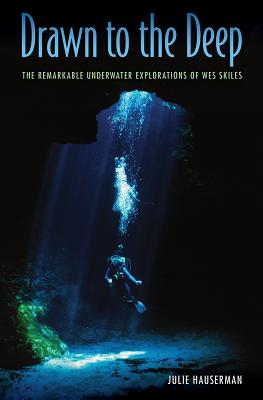 Drawn to the Deep: The Remarkable Underwater Explorations of Wes Skiles (Hardcover)


Special Order—Subject to Availability
National Outdoor Book Award, History/Biography Category Dan's Cave looks like the entrance to the underworld. Two divers swim along a luminous blue-green passage, flashlights cutting through the water, a dark mass of stalactites suspended overhead. This is the breathtaking National Geographic cover photo taken by Wes Skiles (1958-2010), a top nature photographer who died in a diving accident before the issue was published. Drawn to the Deep celebrates the life of an extraordinary adventurer who braved extreme danger to share the hidden beauty and environmental truths of the planet with others. Skiles felt a pull to the water as a child, captivated by the cobalt springs of Florida. His passion for diving and his innovative camera techniques earned him assignments with National Geographic and Outside. He also took part in creating over a hundred films, many of which won international awards and acclaim. Skiles was a self-taught expert on Florida's freshwater springs and an outspoken advocate for their conservation. He went head to head with scientists and government officials who dismissed his firsthand observations of water movement through the "Swiss-cheese" karst rock of the underground aquifer. But he never gave up on his quest to disprove the prevailing scientific models or to protest what they allowed--the unchecked pumping and depletion of Florida's groundwater. Through interviews with Skiles's friends and family, along with insights from his own journals, Julie Hauserman describes the escapades and achievements that characterized his life's work. This book is the inspiring story of an explorer and activist who uncovered environmental abuses, advanced the field of underwater photography, and astonished the world with unprecedented views of the secret depths of the planet.