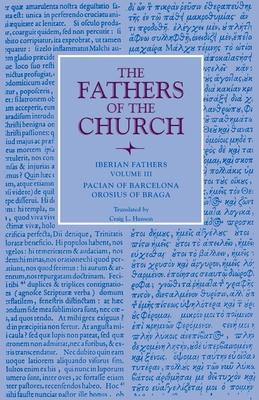 
Not On Our Shelves—Ships in 1-5 Days
In recent years historians and theologians have focused considerable attention on the church of late antiquity. The Constantinian revolution of the early fourth century produced changes that would affect profoundly and permanently the fabric of traditional Greco-Roman society and early Christian spiritual life. This volume--the third of the works of the Iberian Fathers in the Fathers of the Church series--brings together writings from Pacian of Barcelona and Orosius of Braga, two notable Iberian authors and orthodox partisans of the turbulent late fourth and early fifth centuries. Pacian, bishop of Barcelona, was renowned in his own day for both his active ministry and his literary talents. Admired by St. Jerome as an author ""of restrained eloquence,"" Pacian produced several works, ranging from his correspondence with the Novatianist Sympronian to his thoughtful treatises on penance and baptism. Orosius, priest of Braga, was once considered noteworthy principally for his authorship of the universalistSeven Books of History against the Pagans and his student/mentor relationships with St. Augustine of Hippo and St. Jerome. But, in addition, in the two treatises translated here he furnishes mush insight into the contemporary heretical movements in Spain and the course of Peligian controversy. Included in this volume are Pacian's three letters to the Novatianist Sympronian, his tract on repentance and the rite of penance (On Penitents), and his sermon concerning baptism (On Baptism). Orosius's works included the Inquiry or Memorandum to Augustine on the Error of the Priscilliantists and Origenists and the apologetic Book in Defense against the Pelagians. Extensive notes and helpful introductions offer readers further guidance and detail.