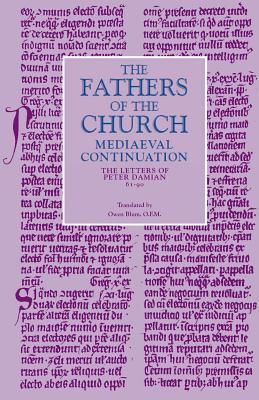 Peter Damian (1007-1072), an eleventh-century monk and man of letters, left a large and significant body of correspondence. Over one hundred and eighty letters have been preserved, principally from Damian's own monastery of Fonte Avellana. Ranging in length from short memoranda to longer monographs, the letters provide a contemporary account of many of the controversies of the eleventh century: purgatory, the Eucharist, clerical marriage and celibacy, immorality, and others. Peter Damian, or "Peter the Sinner" as he often referred to himself, was one of the most learned men of his day, and his letters are filled with both erudition and zeal for reform.

This third volume of The Letters of Peter Damian is a careful, fluent, and annotated translation of Letters 61-90. These letters reveal the author's concern with the contemporary need for reforms, centering on clerical, especially episcopal, celibacy and on the "heresy" of simony which involved the purchase of ecclesiastical offices. In Letter 89, for example, Damian addresses the Selvismatic attempt of antipope Honorius II (Cadalus of Parma) to circumvent the election of Alexander II by the newly organized college of cardinal bishops. Also, among the letters here presented are several of a highly spiritual, even mystical content. These letters demonstrate that this active reformer was at heart a solitary soul who, when away from home, longed for his "beloved solitude," where he could practice the contemplative life. Eventually, Damian grew weary of his efforts at reform and asked to be retired from his office of cardinal bishop of Ostia.

Because Damian's Latin was a living language that surpasses the ability of classical Latin lexicography to cope with it, all disciplines that make use of medieval thought will welcome this English translation. Owen J. Blum's thorough notes to each letter indicate the vocabulary problems he encountered and how they were resolved. This third volume, like its companions, uses Damian's thought to understand an important and gripping period in the history of church and state. With these intimate revelations into his character and motivation, readers may more readily appreciate Damian's total dedication to his mission.