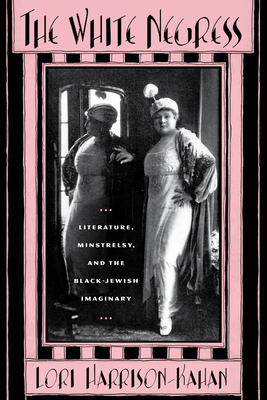 
Not On Our Shelves—Ships in 1-5 Days
During the first half of the twentieth century, American Jews demonstrated a commitment to racial justice as well as an attraction to African American culture. Until now, the debate about whether such black-Jewish encounters thwarted or enabled Jews’ claims to white privilege has focused on men and representations of masculinity while ignoring questions of women and femininity. The White Negress investigates literary and cultural texts by Jewish and African American women, opening new avenues of inquiry that yield more complex stories about Jewishness, African American identity, and the meanings of whiteness.

Lori Harrison-Kahan examines writings by Edna Ferber, Fannie Hurst, and Zora Neale Hurston, as well as the blackface performances of vaudevillian Sophie Tucker and controversies over the musical and film adaptations of Show Boat and Imitation of Life. Moving between literature and popular culture, she illuminates how the dynamics of interethnic exchange have at once produced and undermined the binary of black and white.
LORI HARRISON-KAHAN teaches in the English department at Boston College and has previously taught at Connecticut College, Harvard University, and the University of Pennsylvania.
"Skillfully demonstrates how Jewish American women writers employ images of blackness to undermine the division between 'white' and 'black' identity. The figure of the 'White Negress' thus becomes the site for a feminist critique of whiteness."
— Martha J. Cutter

"Placing gender squarely at the intersection of black-Jewish cultural imaginings, The White Negress makes a stunning contribution to our understanding of whiteness, race relations, and ethnic literature."
— Joyce Antler

"By sustaining attention to women and fidelity to the complex and even contradictory texts, The White Negress constitutes both a convincing critique of scholarship on minstrelsy and a fascinating literary study in its own right."

"an important contribution to figurations of race in the twentieth century."

"This is a fine book, filled with expertly hewn close readings of a small but important group of female actors and authors, women who made significant contributions to how African Americans and Jews of European descent imagined one another."

"The White Negress acts as a significant challenge to existing scholarship concerning whiteness, cross-racial performances, and black-
Jewish encounters. Although, by her own admission, Harrison-Kahan’s book is not 'a comprehensive survey of black-Jewish relations among women' or Jewish women and blackface performance, her study is perhaps most noteworthy for its assertion that future work in these fields must take women, gender, and sexuality seriously."
— American Studies Journal

"The White Negress offers innovative approaches for understanding the shifting logics of citizenship and racial formation across the twentieth century through the work of culture."
— American Literature