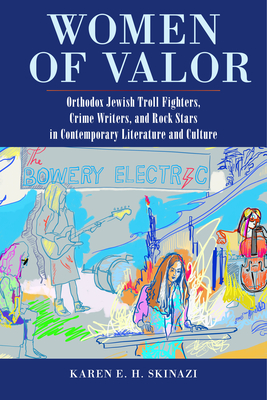 Media portrayals of Orthodox Jewish women frequently depict powerless, silent individuals who are at best naive to live an Orthodox lifestyle, and who are at worst, coerced into it. Karen E. H. Skinazi delves beyond this stereotype in Women of Valor to identify a powerful tradition of feminist literary portrayals of Orthodox women, often created by Orthodox women themselves. She examines Orthodox women as they appear in memoirs, comics, novels, and movies, and speaks with the authors, filmmakers, and musicians who create these representations. Throughout the work, Skinazi threads lines from the poem “Eshes Chayil,” the Biblical description of an Orthodox “Woman of Valor.” This proverb unites Orthodoxy and feminism in a complex relationship, where Orthodox women continuously question, challenge, and negotiate Orthodox and feminist values. Ultimately, these women create paths that unite their work, passions, and families under the framework of an “Eshes Chayil,” a woman who situates religious conviction within her own power.
KAREN E. H. SKINAZI is a senior lecturer and the director of Liberal Arts at the University of Bristol in the United Kingdom. She is a scholar of multiethnic, American, and women’s literature and published a critical edition of Marion: The Story of an Artist’s Model.
"Skinazi delivers a richly insightful, sensitive, and wide-ranging exploration of religious identity, women’s agency, and autonomy, providing genuinely illuminating perspectives on both the individual and the collective."
— Ranen Omer-Sherman

"This fascinating and engaging book is a significant contribution to the study of contemporary Jewish literature and culture."
— Wendy Zierler

“This wonderfully wise, sensitive and beautifully written study is a book I’ve been waiting for. Skinazi’s nuanced rendering of Orthodox Jewish women sees them at long last dodge their popular and academic stereotypes to appear as the agents and storytellers of their own lives.”
— Devorah Baum

"Women of Valor is eye-opening, energetic and intellectually adventurous. Drawing on a wide range of written, pictorial and cinematic sources, it brings to life a hitherto forgotten group of women."
— Bryan Cheyette

"Today's narratives by and about Orthodox women are an engaging, at times provocative, counterargument to the mainstream media's picture of the Gitl of the twenty-first century. They are in constant battle with that picture, often manage to reinforce it, and have not emerged as the dominant image – or images."
— Sir Read A Lot

"Skinazi serves as a knowledgeable guide for both the general reader and the scholar interested in contemporary cultural production that reflects the diversity and complexity of Orthodox women’s lives."
— Jewish Book Council

"At the heart of growing fundamentalism in the charedi sector lies the fate of women. Rabbis have banned women from driving, enforced modesty patrols and gender segregation on buses, and omitted women’s faces from newspapers and magazines. Charedi women, however, have not all been sitting in silent despair, they’ve been pushing back. Karen Skinazi highlights the work that charedi women are doing today."
— Jewish Renaissance

“Skinazi’s analysis demonstrates how attention to the particularities of Orthodox Jewish womanhood is crucial for the analysis of their literature. Her invitation for an analytic recalibration in Jewish American literature is timely and generative.”

"The Power Beneath That Sheitel," by Karen E.H. Skinazi
— Lilith

"Women of Valor makes an important contribution to the study of Orthodox women, demonstrating the diversity of experiences and voices within that population, exposing subcultures within Orthodoxy that often go unnoticed, and complicating our understanding of how these 'traditional' communities relate to modernity."
— American Jewish History

“Skinazi’s book is a thorough and engaging examination of all the ways in which Orthodox women have been imagined in literature and American popular culture of the past few decades. In it, we see not just the complexity of the figure of the Orthodox woman, but also the varied ways people from within and outside the community have represented her. Sometimes, these depictions say more about those outside the community than about those within it.”
— Jewish Journal

"What Skinazi has created with this well-researched monograph is a conversation—one that Orthodox Jewish women have started with their creative works that seek to expose issues of concern as they work toward solutions. This is the first of many conversations scholars should have about representations of and by Orthodox Jewish women, turning a contemporary eye on their subject and with empathy for these women and their liberation in a creative space separate from men."
— Jewish Film and New Media

"Skinazi's approach to the different texts and ideas she introduces in Women of Valor is nuanced and complex....Women of Valor provides a breath of fresh air, for popular audiences as well as for orthodox audiences interested in the voices of orthodox Jewish women within their culture, or on their way out."
— Journal of American Studies

"Skinazi’s work is a valuable contribution to those interested in women’s studies, religious studies, and literature."
— Tulsa Studies in Women’s Literature