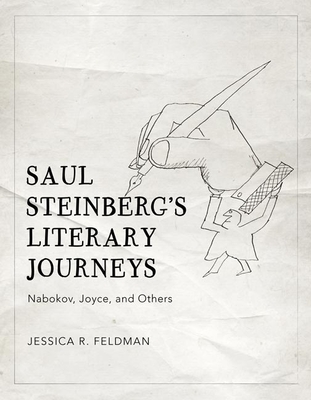 Saul Steinberg's inimitable drawings, paintings, and assemblages enriched the New Yorker, gallery and museum shows, and his own books for more than half a century. Although the literary qualities of Steinberg's work have often been noted in passing, critics and art historians have yet to fathom the specific ways in which Steinberg meant drawing not merely to resemble writing but to be itself a type of literary writing. Jessica R. Feldman's Saul Steinberg's Literary Journeys, the first book-length critical study of Steinberg's art and its relation to literature, explores his complex literary roots, particularly his affinities with modernist aesthetics and iconography. The Steinberg who emerges is an artist of far greater depth than has been previously recognized.

Feldman begins her study with a consideration of Steinberg as a reader and writer, including a survey of his personal library. She explores the practice of modernist parody as the strongest affinity between Steinberg and the two authors he repeatedly claimed as his "teachers"--Vladimir Nabokov and James Joyce. Studying Steinberg's art in tandem with readings of selected works by Nabokov and Joyce, Feldman explores fascinating bonds between Steinberg and these writers, from their tastes for parody and popular culture to their status as mythmakers, migr's, and perpetual wanderers. Further, Feldman relates Steinberg's uniquely literary art to a host of other authors, including Rimbaud, Baudelaire, Flaubert, Gogol, Tolstoy, and Defoe.

Generously illustrated with the artist's work and drawing on invaluable archival material from the Saul Steinberg Foundation, this innovative fusion of literary history and art history allows us to see anew Steinberg's art.

Jessica R. Feldman is Professor Emerita of English at the University of Virginia and author of Victorian Modernism: Pragmatism and the Varieties of Aesthetic Experience and Gender on the Divide: The Dandy in Modernist Literature.