FEMINIST REALISM AT THE FIN DE SIÈCLE: The Influence of the Late-Victorian Woman­­­­’s Press on the Development of the Novel (Hardcover) 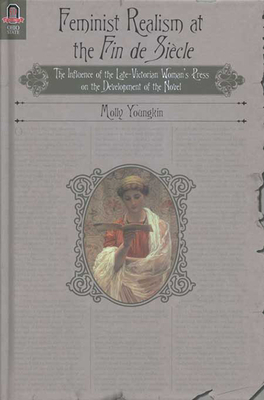 FEMINIST REALISM AT THE FIN DE SIÈCLE: The Influence of the Late-Victorian Woman­­­­’s Press on the Development of the Novel (Hardcover)


Special Order—Subject to Availability
Molly Youngkin takes on a major literary problem of the turn-of-the-century: Was the transition from the Victorian novel to the modern novel enabled by antirealist or realist narrative strategies? To answer this question, Youngkin analyzes book reviews that appeared in two prominent feminist periodicals circulated during the late-Victorian era—Shafts and The Woman’s Herald. Through reviews of the works of important male and female authors of the decade—Thomas Hardy, Sarah Grand, George Gissing, Mona Caird, George Meredith, Ménie Dowie, George Moore, and Henrietta Stannard—these periodicals developed a feminist realist aesthetic that drew on three aspects of woman’s agency (consciousness, spoken word, and action) and emphasized corresponding narrative strategies (internal perspective, dialogue, and description of characters’ actions). Still, these periodicals privileged consciousness over spoken word and action and, by doing so, encouraged authors to push the boundaries of traditional realism and anticipate the modernist aesthetic. By acknowledging the role of the woman’s press in the development of the novel, this book revises our understanding of the transition from Victorianism to modernism, which often is characterized as antirealist. Late-Victorian authors working within the realist tradition also contributed to this transition, particularly through their engagement with feminist realism. Youngkin deftly illustrates this transition and in so doing proves that it cannot be attributed to antirealist narrative strategies alone.
Molly Youngkin is assistant professor of English at California State University, Dominguez Hills.
“The method, the premise, the virtually untapped contemporary sources and the approach to explicitly feminist criticism of New Woman novels are all original and will be valuable to students and scholars of nineteenth- and twentieth-century literature.” —Sally Mitchell, Temple University

“Youngkin offers new and important contexts for understanding the rise of New Woman fiction but also, very importantly, for understanding the nuanced differences among these novels of critical importance to critics, feminists, and avid fans of realist fiction in the nineteenth century.” —Teresa Mangum, University of Iowa