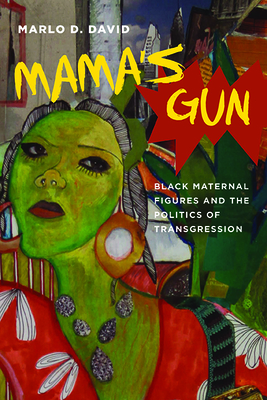 
Not On Our Shelves—Ships in 1-5 Days
(This book cannot be returned.)
In Mama’s Gun: Black Maternal Figures and the Politics of Transgression, Marlo D. David identifies five bold, new archetypes of black motherhood for the post-civil rights generation in order to imagine new ways of thinking about pervasive maternal stereotypes of black women. Rather than avoiding “negative” images of black motherhood, such as welfare queens, teen mothers, and “baby mamas,” Mama’s Gun centralizes these dispossessed figures and renames them as the Young Mother, the Blues Mama, the Surrogate, Big Mama, and the Mothership.

Taking inspiration from African American fiction, historical accounts of black life, Afrofuturism, and black popular culture in music and on screen, David turns her attention to Sapphire’s Push, Octavia Butler’s Dawn, and Suzan-Lori Parks’s Getting Mother’s Body as well as the performance art of Erykah Badu and the films of Tyler Perry. She draws out the implications of black maternal figures in these texts who balk at tradition and are far from “ideal.” David’s study shows how representations of blackness are deeply embedded in the neoliberal language of contemporary American politics and how black writers and performers resist such mainstream ideologies with their own transgressive black maternal figures.

Marlo D. David is Associate Professor in the Department of English and the Women’s, Gender, and Sexuality Studies Program at Purdue University.

“David moves easily between and among geopolitical framings and microanalyses of works of art. The book shows how representations of black motherhood, on and off the page, shift and change over time and in different kinds of work and genres. A great strength of this book is its deep engagement with the rhetoric of neoliberalism as it pertains to certain forms of black maternity.” —Jennifer DeVere Brody, Stanford University