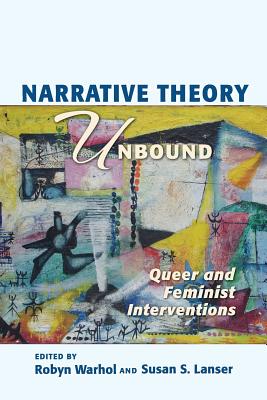 
Not On Our Shelves—Ships in 1-5 Days
(This book cannot be returned.)
Under the bold banner of Narrative Theory Unbound: Queer and Feminist Interventions, editors Robyn Warhol and Susan S. Lanser gather a diverse spectrum of queer and feminist challenges to the theory and interpretation of narrative. The first edited collection to bring feminist, queer, and narrative theories into direct conversation with one another, this anthology places gender and sexuality at the center of contemporary theorizing about the production, reception, forms, and functions of narrative texts.

Through twenty-one essays prefaced by a cogent history of the field, Narrative Theory Unbound offers new perspectives on narrative discourse and its constituent elements; on intersectional approaches that recognize race, religion, and national culture as integral to understanding sexuality and gender; on queer temporalities; on cognitive research; and on lifewriting in graphic, print, and digital constellations. Exploring genres ranging from reality TV to fairy tales to classical fiction, contributors explore the thorny, contested relationships between feminist and queer theory, on the one hand, and between feminist/queer theory and contemporary narratologies, on the other. Rather than aiming for cohesiveness or conclusiveness, the collection stages open-ended debates designed to unbind the assumptions that have kept gender and sexuality on the periphery of narrative theory.
Robyn Warhol is Arts and Humanities Distinguished Professor of English at The Ohio State University. Susan S. Lanser is Professor of Comparative Literature, English, and Women’s, Gender, and Sexuality Studies at Brandeis University.
“This is an important, field-changing book. It should be required reading for any course on narrative theory, and it could well be used in courses on literary theory more broadly as well as in courses on feminist and/or queer literary theory and criticism.” —Margaret Homans, Yale University