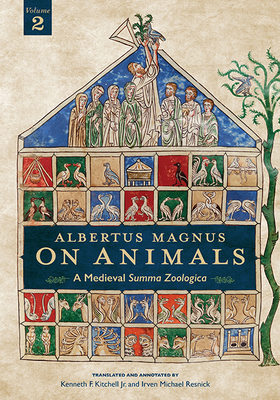 
Not On Our Shelves—Ships in 1-5 Days
(This book cannot be returned.)
Albertus Magnus has long been recognized as one of the greatest minds of the Middle Ages; his contemporaries conferred upon him the title Doctor Universalis. An epitaph at his tomb described him as prince among philosophers, greater than Plato, and hardly inferior to King Solomon in wisdom. In 1941, Pope Pius XII named Albertus Magnus patron saint of scientists.
In his work De animalibus, Albert integrated the vast amount of information on nature that had come down to him in previous centuries: the exposition of Michael Scotus’s translation from the Arabic of Aristotle’s books on the natural world (Books 1–19), Albert’s own revisions to Aristotle’s teachings (Books 20–21), and a “dictionary” of animals appropriated largely from the De natura rerum of Thomas of Cantimpré (Books 22–26). Albert’s comprehensive treatise on living things was acknowledged as the reputable authority in biology for almost five hundred years.
In this translated and annotated edition, Kenneth F. Kitchell Jr. and Irven Michael Resnick illuminate the importance of this work, allowing Albert’s magnum opus to be better understood and more widely appreciated than ever before. Broken into two volumes (Books 1–10 and 11–26),Albertus Magnus On Animals is a veritable medieval scientific encyclopedia, ranging in topics from medicine, embryology, and comparative anatomy to women, hunting and everyday life, commerce, and much more—an essential work for historians, medievalists, scientists, and philosophers alike.

Kenneth F. Kitchell Jr. is Professor Emeritus in the Classics Department at the University of Massachusetts Amherst. Irven Michael Resnick holds the Chair of Excellence in Judaic Studies at the University of Tennessee at Chattanooga. Together they have published an earlier edition of Albertus Magnus On Animals: A Medieval Summa Zoologica (1999); Albertus Magnus’s Questions Concerning Aristotle’s “On Animals” (2008); and Albert the Great: A Selectively Annotated Bibliography (1900–2000) (2004).
“The rigorous editorial attention this difficult work has received constitutes a gift to future scholars for which medievalists and historians of science have reason to be grateful.” —Jean A. Givens, Journal of the History of Biology

“We can be grateful for the enormous labour expended on this full version of a difficult, historically important text by a medieval thinker of vast knowledge and unquestionable intellectual power and dedication.” —Cynthia M. Pyle, Nature