Opening the Floodgates: Why America Needs to Rethink Its Borders and Immigration Laws (Critical America #80) (Paperback) 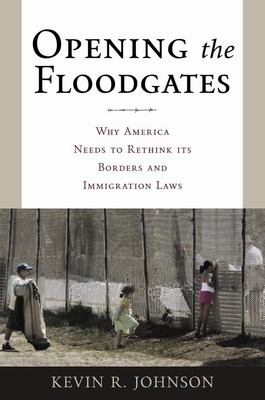 Opening the Floodgates: Why America Needs to Rethink Its Borders and Immigration Laws (Critical America #80) (Paperback)

This is book number 80 in the Critical America series.

Seeking to re-imagine the meaning and significance of the international border, Opening the Floodgates makes a case for eliminating the border as a legal construct that impedes the movement of people into this country.
Open migration policies deserve fuller analysis, as evidenced by President Barack Obama's pledge to make immigration reform a priority. Kevin R. Johnson offers an alternative vision of how U.S. borders might be reconfigured, grounded in moral, economic, and policy arguments for open borders. Importantly, liberalizing migration through an open borders policy would recognize that the enforcement of closed borders cannot stifle the strong, perhaps irresistible, economic, social, and political pressures that fuel international migration.
Controversially, Johnson suggests that open borders are entirely consistent with efforts to prevent terrorism that have dominated immigration enforcement since the events of September 11, 2001. More liberal migration, he suggests, would allow for full attention to be paid to the true dangers to public safety and national security.

Kevin R. Johnson is Mabie-Apallas Professor of Public Interest Law and Chicano/a Studies at the University of California Davis. His books include "Mixed Race America and the Law: A Reader" (NYU Press, 2002) and "The "Huddled Masses" Myth: Immigration and Civil Rights."