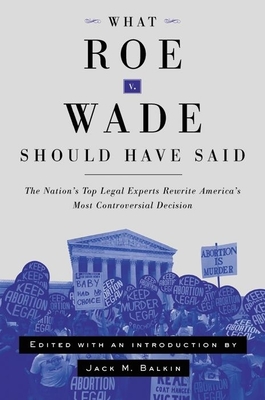 In January 1973, the Supreme Court's opinion in Roe v. Wade struck down most of the country's abortion laws, and held for the first time that women had a constitutional right to safe and legal abortions. Three decades later, Roe v. Wade remains one of the Supreme Court's most controversial decisions, and political struggles over abortion rights still divide American politics. Roe has emerged as a central issue in federal judicial nominations, becoming a powerful symbol in debates about judicial restraint, judicial activism, and the proper role of courts in a democratic society. In What Roe v. Wade Should Have Said, eleven distinguished constitutional scholars rewrite the opinions in this landmark case in light of thirty years of experience but making use only of sources available at the time of the original decision. Taking positions both for and against the constitutional right to abortion, the contributors offer novel and illuminating arguments that get to the heart of this fascinating case. In addition, Jack Balkin gives a detailed introduction to Roe v. Wade, chronicling the history of the Roe litigation, the constitutional and political clashes that followed it, and the state of abortion rights in the U.S. today. Contributing their versions of Roe are: Anita Allen, Akhil Amar, Jack M. Balkin, Teresa Stanton Collett, Michael Stokes Paulsen, Jeffrey Rosen, Jed Rubenfeld, Reva Siegel, Cass Sunstein, Mark Tushnet, and Robin West.
Jack M. Balkin is Knight Professor of Constitutional Law and the First Amendment at Yale Law School, and the Founder and Director of Yale's Information Society Project. He is the author of numerous books and the editor of What Brown v. Board of Education Should Have Said. He lives in New Haven, CT.