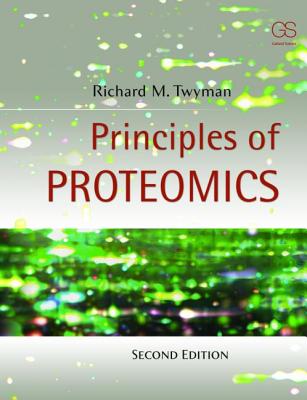 Principles of Proteomics, Second Edition, provides a concise and user-friendly introduction to the diverse technologies used for the large-scale analysis of proteins, as well as their applications, and their impact in areas such as drug discovery, agriculture, and the fight against disease.

Proteomics is a fast-advancing field in which researchers seek to capture all the proteins in the cell and characterize them in ever more detail. Principles of Proteomics has been fully updated to reflect the most recent developments in the field without losing its focus on the underlying principles. With worked examples, case studies profiling both established and emerging technologies, and further reading lists for each chapter, Principles of Proteomics is an ideal introduction for students, researchers and those working in the industry.
Richard Twyman is a scientific writer and lecturer in molecular biology and biotechnology, focusing on developmental and cell biology, gene transfer to microbes, animals and plants, transgenics, genetic manipulation, genomics, proteomics and systems biology. He has worked extensively in these topic areas and has written all manner of articles ranging from primary research papers and reviews in high-impact journals to some of the most popular scientific textbooks in the world, including Principles of Gene Manipulation (now nearly 30 years in print and in its 8th edition). He is also a contributor for Human Molecular Genetics (now 10 years in print and in its 3rd edition).After working as a research scientist and scientific writer for 10 years, Richard set up a scientific management consultancy in 2001 which has been very successful, with a client base now including many research institutes (e.g. Fraunhofer IME, RWTH University of Aachen, University of Verona, St Georges Hospital Medical School, University of Lleida, University of York, University of Oxford, University of Cambridge), prominent public institutions (e.g. Wellcome Trust, Spanish National Research Council), publishers (e.g. Garland Press, Taylor & Francis, Wiley-VCH, Ashley Publications, Blackwell Science, Elsevier) international research consortia (e.g. Pharma-Planta, Smart-Cell, Comofarm) and industrial customers (e.g. Sartorius-Stedim Biotech, Dow AgroScience). The work involves writing research articles, reviews, book chapters, grant proposals, reports, white papers and steering documents, including business development and strategy plans. In order to keep up with the latest in developmental biology, biotechnology, genomics and proteomics, Richard has links with a number of companies and academic institutions including the Fraunhofer IME in Germany, RWTH Aachen, the University of Warwick and Cranfield University where he lectures in biotechnology/genomics and scientific writing and management.