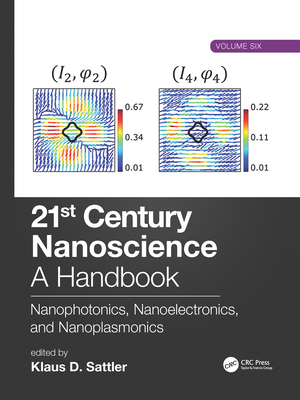 21st Century Nanoscience - A Handbook: Nanophotonics, Nanoelectronics, and Nanoplasmonics (Volume 6) will be the most comprehensive, up-to-date large reference work for the field of nanoscience. Handbook of Nanophysics by the same editor published in the fall of 2010 and was embraced as the first comprehensive reference to consider both fundamental and applied aspects of nanophysics. This follow-up project has been conceived as a necessary expansion and full update that considers the significant advances made in the field since 2010. It goes well beyond the physics as warranted by recent developments in the field. This sixth volume in a ten-volume set covers nanophotonics, nanoelectronics, and nanoplasmonics.

Provides the most comprehensive, up-to-date large reference work for the field. Chapters written by international experts in the field. Emphasises presentation and real results and applications.

This handbook distinguishes itself from other works by its breadth of coverage, readability and timely topics. The intended readership is very broad, from students and instructors to engineers, physicists, chemists, biologists, biomedical researchers, industry professionals, governmental scientists, and others whose work is impacted by nanotechnology. It will be an indispensable resource in academic, government, and industry libraries worldwide. The fields impacted by nanophysics extend from materials science and engineering to biotechnology, biomedical engineering, medicine, electrical engineering, pharmaceutical science, computer technology, aerospace engineering, mechanical engineering, food science, and beyond.

Klaus D. Sattler pursued his undergraduate and master's courses at the University of Karlsruhe in Germany. He received his PhD under the guidance of Professors G. Busch and H.C. Siegmann at the Swiss Federal Institute of Technology (ETH) in Zurich. He was at the University of California, Berkeley, for three years as a Heisenberg fellow, where he initiated the first studies of atomic clusters on surfaces with a scanning tunneling microscope. Dr. Sattler accepted a position as professor of physics at the University of Hawaii, Honolulu, in 1988. In 1994, his group produced the first carbon nanocones. His current work focuses on novel nanomaterials and solar photocatalysis with nanoparticles for the purification of water. He is the editor of the sister references, Carbon Nanomaterials Sourcebook (2016) and Silicon Nanomaterials Sourcebook (2017), as well as Fundamentals of Picoscience (2014). Among his many other accomplishments, Dr. Sattler was awarded the prestigious Walter Schottky Prize from the German Physical Society in 1983. At the University of Hawaii, he teaches courses in general physics, solid state physics, and quantum mechanics.