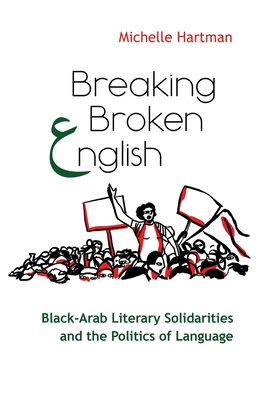 Black-Arab political and cultural solidarity has had a long and rich history in the United States. That alliance is once again exerting a powerful influence on American society as Black American and Arab American activists and cultural workers are joining forces in formations like the Movement for Black Lives and Black for Palestine to address social justice issues. In Breaking Broken English, Hartman explores the historical and current manifestations of this relationship through language and literature, with a specific focus on Arab American literary works that use the English language creatively to put into practice many of the theories and ideas advanced by Black American thinkers.

Breaking Broken English shows how language is the location where literary and poetic beauty meet the political in creative work. Hartman draws out thematic connections between Arabs/Arab Americans and Black Americans around politics and culture and also highlights the many artistic ways these links are built. She shows how political and cultural ideas of solidarity are written in creative texts and emphasizes their potential to mobilize social justice activists in the United States and abroad in the ongoing struggle for the liberation of Palestine.
Michelle Hartman is professor of Arabic literature and director of the Institute of Islamic Studies at McGill University as well as a research associate at the Simone de Beauvoir Institute at Concordia University. She is the author of several books, including Native Tongue, Stranger Talk: The Arabic and French Literary Landscapes of Lebanon.